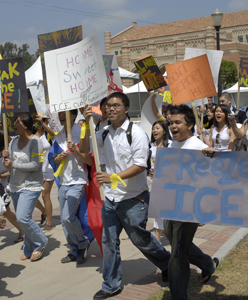 While yelling chants of “Hey, hey, ho, ho, hell no we won’t go!” a diverse group marched from the top of the famous Janss Steps on the UCLA campus, where notable figures such as Martin Luther King, Jr. and John F. Kennedy have held rallies, to Meyerhoff Park.

These students were protesting an agreement between the United States and Vietnam, known as the Memorandum of Understanding, that allows for the repatriation of some Vietnamese citizens arriving in the U.S. on or after July 12, 1995. This agreement affects about 1,500 Vietnamese individuals.

After the march, a group of students gathered to hear fellow students speak out against this agreement.