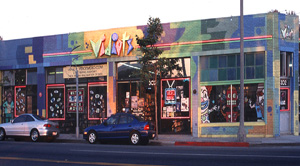 2008’s surreal indie flick Be Kind Rewind told the tale of two film buffs working in a unique land of cinemas called the video store. The video store was also a source of inspiration for early 1990s directors like Kevin Smith and Quentin Tarantino – guys who love movies of all genres and who wish to celebrate them on VHS, DVD, MP3 and (gasp!) even defunct laserdiscs.

Although technology is ever-changing, pushing the newest, most coveted format to the front of the race each day, the video store is still a constant in many neighborhoods across the United States. Many chain stores like Blockbuster and Hollywood Video have dominated the market, offering the studios’ top and most current new releases.

However, a few tiny little mom andd pop operations have also managed to do the unthinkable: carve out a loyal fan base of cinephiles, unable to get their fix of Antonioni’s Zabriskie Point, for example, or the straight-to-video sex drama, Wild Orchid II: Two Shades of Blue through the corporate operations. Sure, a devotee could schlep to the local revival theater and wait in line for a good seat. But for many, it’s more satisfying to adopt the following creed: “Membership has its privileges,” and join his or her local video store.

The independent vibe at this L.A. staple isn’t just relegated to the music industry. Amoeba also buys, sells and trades movies that its loyal customers bring in.

Another great location to check out all the best in movie magic is quirky Vidiots (302 Pico Blvd., Santa Monica). This store, co-owned by Cathy Tauber and Patricia Polinger, has been a Westside stable for years now.

Vidiots caters to niche audiences; the kind of folk that still get dressed up to attend midnight screenings of The Rocky Horror Picture Show and the Star Wars sagas. Instead of housing 80 copies of the latest Katherine Heigl or Anne Hathaway romantic comedy, Vidiots chooses to focus on the films that have inspired a generation.

Perhaps that’s why some major heavy-hitters in entertainment have come here and put in personal appearances to plug their latest efforts and to hobnob with Vidiots’ eclectic consumer base. To date, noted artistic favorites like Santino Rice (“Project Runway”) and directors Wes Craven and Paul Verhoeven have been just a few of the store’s big draws.

Rocket Video has learned that to stay current in the shaky world of video (particularly DVD) rentals, one must adapt to the current trends. That’s why its Web site contains a blog, staff picks and a calendar list of events for attendees to plan their weeks around. Recent fun here has included a dance party with Rocket Video’s in-house DJ, as well as a Tax Day celebration that gave customers a two-for-one deal on rentals, as well as free popcorn.

Ultimately, that’s the trick for most video rental houses – viability. How does one stay profitable when its medium – its bread and butter – is fast-approaching an obsolete legacy in the annals of history?

For larger chains, their competition has come primarily from online rivals such as Netflix. For the little guys, it’s all about, the cool/camp factor. There’s still something nostalgic, noble and a bit romantic about truckin’ on down to the video store and rifling through each section to find what you’re looking for.

There are also the people working at each of these establishments who lend something extra that online shopping and Blockbuster just can’t give you. They may not be here forever, but while there are still men and women out there who can’t get enough of Blaxploitation flicks or happen to be lovers of Edith Head’s costuming back in Hollywood’s golden era, there will always be an overly knowledgeable film geek at the local neighborhood indie video store, willing and able to chat up customers and lead them to the correct place in which to find a title or make a surprising new discovery.

Like your best friend’s crazy crew of friends who try to one-up each other in movie and pop-culture knowledge – only, it’s the store version of all that fun. This store has a promotion that ties into L.A.’s Silent Movie Theatre in which both team up to bring fans the best and (probably) forgotten films of a genre. They also sell a lot of merch (like T-shirts) for customers who want to wear their support on their backs.

Celebrating their 20th year, this store is a great time just waiting to happen. It has really gotten with the program, offering movie buffs the most recent titles on Blu-Ray. Customers can also find out-of-print titles at the store’s Web site through Amazon.

It’s exactly what you think it is: a great shop to find coveted classic movie titles. This establishment’s Web site is a repository for everything one needs to see or find their favorites. Its film forum rivals that of any well-known film preservation society.