Where The Men At?: Women’s Dominance has Schools Courting Males 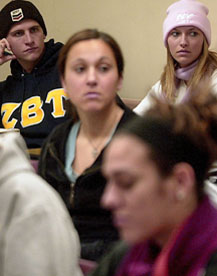 When Nicole Egnatowicz moved into her coed dorm at New Jersey’s Ramapo College, four years ago, it didn’t take her long to notice there was something lacking: namely, men.

The scenario was similar in the classroom.

"If there were two guys in my class that was a lot," said the 22-year-old, who graduated in December with a degree in psychology.

At colleges across the country, the gender imbalance has been growing steadily for decades as women continue to outpace men in the pursuit of higher education.

Teenage girls typically have better grades than their male counterparts, but college admissions officers say they can’t stand idly by and watch the schools become mostly female bastions. And so, colleges are taking steps to reverse the trend – reaching out to high school boys through direct marketing and phone calls from recruiters and male professors.

Some universities are going even further. A few years ago, Wake Forest University in North Carolina began admitting more men to correct the gender imbalance, even though fewer males had applied. Among state universities, the University of Delaware says it sometimes lowers its expectations for promising boys who faltered in the ninth and 10th grades. And in a yet-to-be-released study, liberal arts colleges acknowledge admitting less-qualified boys to balance enrollment.

It wasn’t always this way.

Consider that in 1951, 66 percent of the nation’s college students were men. A half-century later, women made up 56 percent of the country’s total college enrollment, according to the most recent figures from the National Center for Education Statistics. So does that mean your son could have an edge in the college application process, or that your daughter may be at a disadvantage? Yes. No. Maybe.

"In some cases we know if you are a male, you have a better chance," said Peggy Brennan, coordinator of guidance at Fort Lee (N.J.) High School, adding that the advantage would be greatest for colleges where the gender gap is the most dramatic.

College admissions officers said they are nervously watching the trend.

"There’s a danger that a school faces once you go over 60 percent female or male," said Peter Goetz, a vice provost at Ramapo. "Students want diversity, and diversity starts with gender."

Some schools have worked to attract male students by adding programs that are typically of interest to them, such as business. Others, including Ramapo College, have thought about creating a football team to boost the male population.

In fact, at Penn State University, which boasts an elite football program, 53 percent of students are men. With all due respect to coach Joe Paterno, one school official said men outnumber women because of the popularity of the school’s engineering and science programs.

"As women move into those fields, the gap is narrowing," said John Romano, vice provost and dean of enrollment management, adding that the Nittany Lions have as many rabid female fans as male fans.

At the University of Delaware, where women constitute 58 percent of the student body, administrators say they haven’t lowered standards for male applicants outright, but they may be more lenient with high school boys.

"We see ups and downs in their academic records," said Louis Hirsh, director of admissions for the University of Delaware. "We try to be more forgiving of their transcripts in ninth and 10th grades, when males are more likely to have problems."

Having said that, the admissions director cautioned that parents with sons should not bank on receiving an acceptance letter if the student’s overall academic achievement is not up to par.

"We’re not at a stage where the gender gap is going to override a weak application, mediocre SAT scores, lukewarm grades or a poorly written essay," Hirsh said.

But if the gender gap continues to widen, some say it won’t be long before colleges start to give male applicants special consideration.

Sandy Baum, a professor of economics at Skidmore College in Saratoga Springs, N.Y., recently co-authored a study of admissions practices as they relate to gender at 13 liberal arts schools across the country.

Baum said the study found that schools that were once all-women and have gone coed were more likely to favor male applicants. As the percentage of women at colleges continues to rise, Baum said, other schools might follow suit.

"They are obviously looking to balance enrollment in many ways," Baum said.

Not all colleges have more women. In fact, most of the Ivy League schools still enroll more men. At Princeton University, for example, men make up 55 percent of the student body.

But Tom Mortenson, a senior scholar at The Pell Institute for the Study of Opportunity in Higher Education, said he is alarmed that men are slipping so far behind women in college enrollment. As part of his research – titled "What’s Wrong with the Guys?" – Mortenson found that between 1975 and 2001, the number of bachelor’s degrees earned by men increased by 5 percent. In the same period, the number of bachelor’s degrees earned by women increased by 70 percent.

He contends that the decline could have greater implications for society, from affecting the workforce to creating a shortage of eligible men whom college-educated women would want to date or marry.

Mortenson said the solution is not easing admissions standards, but rather trying to motivate and inspire boys in the classroom as early as kindergarten.

"The boys are starting to tune out and give up in the middle-school grades," Mortenson said. "We’re going to have to engage boys on their terms. Hopefully we can do this without displacing girls."