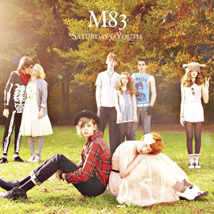 This is the fifth studio album released by M83, the French group known for their electronic and ambient pulsings. Saturdays=Youth, however, makes a very definitive step backwards – in time and quality – tending towards more usual song structures and ’80s pastiches of the My Bloody Valentine variety.

“Graveyard Girl” (the second digital single released, after the instrumental “Couleurs”) features a spoken word, angsty teen poem, serving as a sort of modus operandi for the entire album: “Waiting for someone to love me/Waiting for someone to kiss me/I’m 15-years-old and I feel it’s already too late to live/Don’t you?”

There is plenty more where that came from, but I’ll spare you. Coupled with the hodgepodge of New Wave, shoegazing and dance jams littering the album, the package comes across as a Cure fan time capsule and positively uninteresting caricature.

This Reagan-era genre has been done and redone to death so there’s little to recommend here, other than the generally pleasing but droning vocals and the somehow transcendent “Up!,” a song that musters to offer a hauntingly beautiful take on the self-important immensity of teen longing.