Morgan Spurlock: Looking For A Man, Finding A People 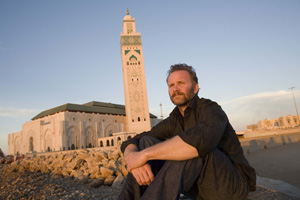 The looming concept of parenthood can drive a person to re-evaluate their existence, to take a long hard look at their life and ask some of the most hard-hitting questions that one encounters. And for one man, that soul searching drove him across the Middle East to do the one thing our government doesn’t seem to be able to do ... find Osama bin Laden. That man is Morgan Spurlock.

With his smash hit documentary Super Size Me and several other producing credits under his belt, Spurlock found himself pondering just what to do next. Of the conception of his latest film, Where in the World Is Osama bin Laden?, he says, “We got the idea in 2005 to go off and find [bin Laden]. He was back in the news. Bush had just gotten elected to a second term. I live in New York City where this is something that people talk about constantly, like how could you not find this guy?”

It was two months into brainstorming that Spurlock’s wife, Alexandra Jamieson, dropped the bombshell that she was pregnant.

“So it was at that moment when the film really was born. It took a very different direction at that point,” Spurlock explains. “For me it was not just about where is he and why haven’t they found him, but what kind of world am I about to bring a kid into?”

It takes a special kind of woman to support her husband voluntarily taking off to one of the most volatile regions in the world during their first pregnancy, but Jamieson proved exceptional, rising to the occasion. There were times when Spurlock himself doubted his choice, especially when he was in Afghanistan and Jamieson began to experience Braxton-Hicks contractions.

“When she started having those, here I am over in the middle of Afghanistan, and I’m like ‘Dude, what am I doing? I need to get out of here.’ Especially [when] you’re in these situations that are incredibly dangerous and things could potentially go horribly wrong, like when we were imbedded with the military [and] you see us when there was a Taliban ambush on the governor’s convoy. There was another day when we were out with the military when we were driving down the road and they discovered an IED in front of our convoy and so we got transported back to the base while the explosive experts went ahead and tried to detonate the IED.

“There’s a potential for things to go horribly wrong all of the time, but you can’t think about it. You just have to keep forging ahead.”

The end product of his ultimate risk is a film both uproariously funny and deeply moving that proves well worth his effort and sacrifices made along the way. In Where in the World Is Osama bin Laden?, what began as a quest to find the man, became a quest to understand a people who so often are portrayed in the news as flag and effigy-burning militants, hell-bent on destroying America.

What he found surprisingly more often was a host of people willing to welcome him into their homes and share a much different viewpoint. “The best thing for me that the movie shows, is the people,” says Spurlock. “I went into this movie thinking that it was going to be a lot harder to get people to talk to us, that nobody was going to open up their homes and that nobody was just going to be honest with us. People were going to be very protective. And this wasn’t the case. Every country that we went to people were doubling over to invite us in, to sit us down to talk about what they felt and what they believed, the way that they look at the world and that’s just incredible. The best part of the film is that openness that people showed us.”

He concludes, “It’s not the people who scream and yell that don’t have a platform. Those people are everywhere. For me, it was giving a voice to the ones that we don’t hear from, the ones that are really the silent majority.”

Spurlock did manage to make it home in one piece, thankfully in time to witness the birth of his son. And while he may not have brought Osama bin Laden back to justice, he did bring back one hell of a film and a wealth of experiences that can only enrich the concept of the world that he passes on to the next generation.

As the great Alex Noble once said, “Success is not a place at which one arrives, but rather the spirit with which one undertakes and continues the journey.”