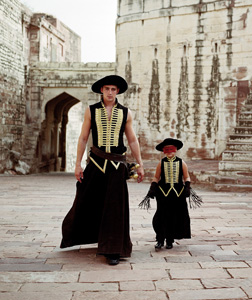 Tarsem Singh’s The Fall opens on a montage of such intense visual splendor I’d be hard pressed to think of a more dashingly observed intro in recent memory. It’s glaringly self-conscious, no doubt, how it goes about its business of being awe-inspiring (can you say “slo-o-ow mo”?), but on a pure visual level we’re talking work that compares favorably with cinematographer Sergei Urusevsky’s 1964 masterpiece I Am Cuba. In eloquent, silvery black and white glimpses we witness – piece by piece – a 1920s cowboy flick gone awry, a tragedy in the midst of unfolding.

In Hollywood’s infancy, stuntmen risked mortal danger without the compulsory safety protocol we have today, and none of the filmic technique to help “sell” a violent move without literally doing it. And in this manner we’re introduced to Roy (Lee Pace), the stuntman who fell too hard and is now making his bedridden residence at a L.A. infirmary. He’s suicidal, coping with post-paralysis legalities, relentless pain and a lost love.

It’s not long before he meets five-year-old Alexandria, played by Catinca Untaru in a revelatory, blooming performance. Untaru, padded with baby fat and stammering in authentic, childish wonderment is absolutely mesmeric.

She plays the whimsical card at least as well as Juno played gutsy pluck. And Tarsem is right to let their chemistry play out in some long shots with awkwardly overlapping dialogue, rather than to manufacture a relationship by over-editing.

Alexandria’s fallen too, not as far, but far enough to keep her holed up in the same hospital with a broken arm. She befriends Roy who tells her a series of fantastical stories scraped up out of thin air and oft influenced by what he thinks Alexandria wants to hear.

Like his stunt player Roy, Tarsem is a showman, and for The Fall he often delivers in spades, including his final montage. It leaves us on a surprising emotional high point, the same way a fireworks finale dazzles us into forgetting we’ve just spent 20 minutes lying on our backs spacing out to the dazzle. Showman, indeed.

The Fall releases in theaters May 9.