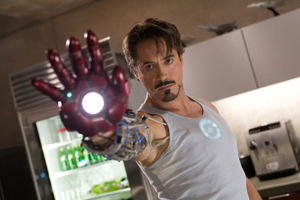 Tony Stark: Hollywood playboy, child prodigy, weapons manufacturer, “merchant of death,” the Da Vinci of our time. Oh, and one last thing ... Iron Man. Though he admits he’s not the “superhero type,” you would never believe that after seeing Robert Downey Jr. portray Stark in Iron Man.

This film delivers on all the hype and doesn’t let you down – simple as that. With Director Jon Favreau at the helm and a cast including Robert Downey Jr., Jeff Bridges, Gwyneth Paltrow and Terrence Howard, how could it not?

In Iron Man, we see the transformation of Stark from a selfish playboy to a selfless hero clad in iron armor (actually a titanium alloy, but Iron Man sounds better). The film has everything a superhero movie should have, along with a story of human redemption.

It delivers with great acting, a great story and great action you’ll want to watch again ... and again.

Iron Man is currently in theaters.