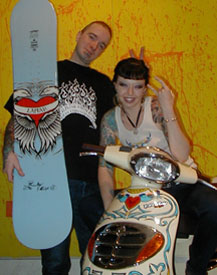 Heidi Minx, founder of the hip apparel design company Franky & Minx, remembers the day that she was inspired to start her own clothing line.

"I was walking through a trade show in Las Vegas, the biggest trade show of the year, called ‘Magic.’ I walked into Junior Denim Company’s booth and saw a pair of jeans that had a really basic ‘heart and banner’ design screened onto the leg of the jeans. The first question out of my mind, since I have tattoos, was, ‘Which artist did you work with?’ They told me that they just found it on some Internet Web site and copied it! I just stood there, and any iota of respect I had for them became non-existent."

Right then and there, Minx decided that her company would have a different name for its customers – friends.

The Franky & Minx line for women consists of crop tops, beaters, bra tops, g-strings and briefs with designs called ‘spray-paint spider web,’ ‘nautical star,’ ‘barbed wire’ and the ‘dragon’ series. Their ‘win some, lose some’ line caters to the sports-minded, while those wearing the ‘players club’ series state that they’re not afraid to take a chance.

Men can find the Franky & Minx line at Urban Outfitters or see it being worn onstage by their favorite rockers like Drowning Pool, Hazen Street, the Bouncing Souls, Sworn Enemy and Sick of it All.

Taime Down from Faster Pussycat is a big supporter, and the women’s line got a major boost from Avril Lavigne. "I sent her stylist about 15 different pieces," says Minx. "Avril liked a bunch of different pieces and wound up keeping all the stuff I sent out to her."

Minx used spray paint, bleach and special trim to customize a wardrobe just for Lavigne. After the pop star was seen in the clothes, Minx got orders for custom work from Brandy and Fuse TV starlet Juliya. "It’s a nice side project," Minx laughs.

Minx loves the fact that she is dressing the stars, but it hasn’t affected her philosophy to treat everyone as equals. "We don’t do anything just to benefit ourselves," the clothier says. Minx proves this fact by being extremely accessible, right down to the street team members that are out promoting Franky & Minx at concerts and other events. Minx says that it’s important to her to stay in touch with the guerilla promoters, often spending prime time with them on the phone.

Artists and designers Franky and Elvis add to the creativity at Franky & Minx; find out what’s going on in their world by going to www.frankyandminx.com.