Tina Lynch: Not Short On Laughter 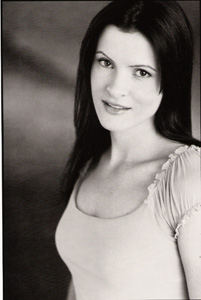 Sauntering into the coffee shop, you would never guess just how funny this 28-year-old tall, dark haired beauty, really is. Well, you can find out May 12, when Tina Lynch, who is part of a sketch comedy show called “The Ground Floor,” screens their comedy shorts at 7:15 p.m. at the UnUrban Coffeehouse.

Lynch and the quirky cast will be on hand for a Q & A with Gerry Fialka, the producer of the event. Lynch, originally from New York, is excited to be a part of this event. She met Steve DePena, the director/filmmaker, when she first arrived in Los Angeles.

“I love working with Steve. It’s like guerilla filmmaking. We do the wackiest things on the streets of L.A. It’s so much fun,” she relays.

Lynch started her career at the young age of 12, working on “Sesame Street.” By the time she was 17, she had signed with an agent and was working in a professional theater company, Chelsea Repertory, part of the Acting Studio. From there, she was accepted into The Ensemble Studio Theatre, where she had the honor of working with writers like Arthur Miller, Romulus Linney and John Patrick Shanley.

Before fleeing the East, Lynch worked on the NY-based soap opera, “As the World Turns” and once out West, starred in a staged version of “Soap Opera Improv.” For the past two years she has worked on several independent films, including Chance, which debuted at the Los Angeles International Short Film Festival.