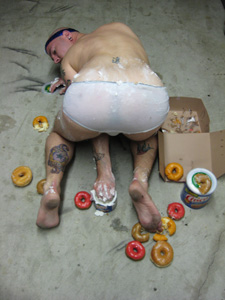 Gregory Barnett isn’t afraid to take his clothes off. At age 26, this go-go dancer from Los Angeles lets candle wax run down his tattooed chest, shows off his Crisco-covered briefs and drops them at a camera flash.

His highly anticipated solo act “Spit,” debuting at Highways Performance Space, will celebrate more than the venue’s 19th birthday. He’s preparing to turn an entire audience on while at the same time, teaching about self-acceptance.

“‘Spit’ is about the idea of learning-taking-receiving during sex … something about energetically taking on your partner’s genetic self,” he explains.

Barnett was born and raised in Los Angeles with a boxer for a father and a mother who also fought and shimmied as a belly dancer. After a brief stint in college, he became involved with Anatomy Riot in 2006, a monthly local performing series curated by 40-year-old choreographer Meg Wolfe. Inspired by Wolfe, he quickly started his own dance company, DanceGood.Dammit!!!

“I use people with strong personalities I meet regardless of their movement, training or theater experience,” he says. “I choreograph a series of tasks based on intention and conviction rather than set movements. It seems a little more foolproof that way when all you have to rely on is your belief in what you’re doing.”

It seemed like destiny that Barnett would debut at Highways. Annually, the space co-presents 250 performances that address community issues.

“I feel like my work is influenced by me being a young queer boy,” he says. “I want the gay analyst and the married 60-year-old female cashier at Rite Aid to get something out of what I do.”

As Barnett prepares to perform “Spit,” he also anticipates exploring “boylesque,” a modern rendition of strip tease where men, not women, do the pleasing.

“I’ve always been interested in burlesque, boylesque and vaudeville. They seem to have a lot more to do with personality and content rather than just body or objectification, and I think that’s where I find it comforting.”