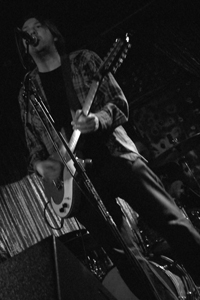 Elf Power is an indie rock band that has been around in various forms for 14 years. They are originally from Athens, Ga., but have a distinctly British sound – specifically, the shoegaze sound that claims such talented acts as Ride, My Bloody Valentine and Lush. Without a doubt these seasoned veterans have created an atmospheric and elaborate sound that is worth hearing live.

The headliners of the night were Los Angeles’ own Bodies of Water, who have been on tour for some time now, including a set at SXSW. This show was their return home, and the energy in the crowd was evident as they intertwined songs with personal stories about their time on the road and various fashion anecdotes. All the members seemed to revel in the fact that they were once again playing to a hometown crowd.