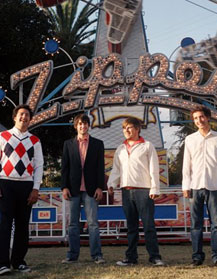 It is Friday night at the Roxy in Hollywood, and four boys in their 20s take to the stage to kick off the evening’s show. In apathetic fashion, two of them strap on guitars, another strolls to the mic, and a fourth huddles in his corner with a mélange of music-making gadgets (namely a keyboard, bells and a trombone).

In the span of a millisecond, they begin to play. What emanates is a sea of frenetic energy: fast-driving drum beats, dense guitars. Topping all these aural layers are vocals that oscillate between deep-pitched groveling and euphoric, melodious crooning, culminating into a beautiful mess of atmospheric pop rock. After the song ends, the lead singer, with a few drops of sweat drizzling from his forehead, leans into the microphone and says, "Hi. We’re The Hanks."

As serious rockers they may be, this L.A.-based foursome has a self-deprecating humor that never lets up.

"We picked up Phil from the street corner," says Josh Grondin, the mousy brown-haired lead singer, when asked how they formed. "Yeah, we were rescuing him from his sex addiction," chimes in Shane Mayo who claims to have played the drums since "dirt was invented."

Joking aside, the formation of The Hanks actually began five years ago at a small boarding school in Sheridan, Ore., where Grondin and Bryan Harris, the bassist, first met. They began playing together out of a shared love of music and what they labeled as "butt rock" – also known as any music that deals with glamour and big hair.

"We went to such a small school that we didn’t have any other choice," Grondin chuckles. "There were basically two bassists in the entire school, and Brian was the better one."

The pair set out to pursue their musical passions by moving to Los Angeles and attending the esteemed Musician’s Institute in Hollywood. It was in a music store where they met Mayo.

Hailing from Chicago, Mayo had an inclination toward old school rap and was armed with mad drummer skills. In need of a horn player, they posted up flyers around the UCLA campus and Philip Katz, a music student studying the trombone, answered the call.

Having played at various venues and working on recordings (and re-recordings) of demos for the past three and a half years, the foursome is preparing for the release of their debut album, Your New Attraction, slated for release in March on indie label Caffeine Teen. The album will include tracks such as "Once Again," a driving, catchy lament on an old flame that yearns to be re-ignited.

"Whatever music we make, we just want it to have an emotional impact on people," reveals Harris.

The Hanks’ incessant touring has not gone without reward, gracing the stage last summer at the New Orleans Voodoo Experience and sharing a bill with the Pixies, Sonic Youth and The Killers. The Deep South was also where The Hanks received their first taste of airplay at the local Louisiana rock station. Up against Lostprophets as their challenger in the weekly contest entitled "Give them the Finger," The Hanks tasted victory.

"We were screaming like little girls, ‘Oh my God, it’s our song!" recalls Katz. "But then we lost the next week."

During the remainder of The Hanks’ set that evening, a teen awash in the crowd belts out, "I love you Bryan!" Grondin responds, "Bryan loves himself too. He even made a shirt with his face on it!" Bryan Harris then thrusts both arms in the air as in proper stance to receive a sea of adoration from the crowd. With this mixture of harmless joviality and unique sound, Harris’ gesture may not be wholly unjustified.

Your New Attraction is set for release in March 2005. For more information, visit www.thehanksonline.com.