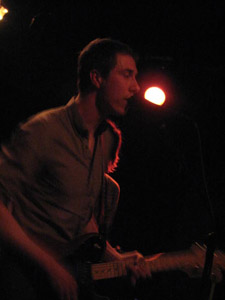 Seamless interpretations of an album’s contents are rare, especially in the case of bands like Siberian, whose recent full-length release, With Me, spills over with perfect and impressive, soaring and yet melancholy, masterpieces.

They’re unassuming enough, keeping in their native Seattle tradition of lumber jack-inspired stage attire, but their music speaks of an intensity and passion that those pretty-boy indie acts with image consultants ought to take notice of. Few of them will reach the pinnacle of songwriting and live performance that this quartet masters with apparent ease.

Singer-guitarist Finn Parnell’s voice is flawlessly clear live, complimented well by music reminiscent of acts such as the Killers, Keane or Radiohead, the likes of which Siberian is clearly on par. It’s highly unlikely that anyone who caught this show will have the luxury of seeing them play such a tiny stage again.

Still, the band lacks the ego to know better, with bassist Zach Tillman offering a quip to the crowd about recently being asked to describe their sound in one word. He had modestly responded, “Epically decent.” It’s doubly amusing in effect because, well, that was two words, and even “Epically Phenomenal” would have been an understatement.