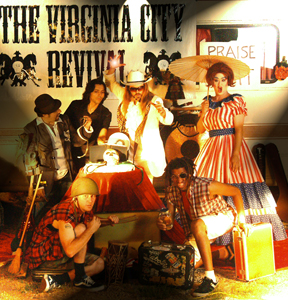 The Virginia City Revival (VCR) has only been playing together a little over a year, but the loud-mouthed country/punk rock/groove band is already turning heads and splitting ears. Their sophomore release, A Farewell to George W. Bush and his Administration, came from the inspiration and feedback they received from their fans after announcing their plans to do a farewell album to the current president.

“It happened really quickly. This is an album that was written in four days,” says singer Rev. Josey DeVille. “It includes everything from puns on him, funny things, pros and cons and everything in between.”

“On my way out here across the country I came to a certain realization about the world, cosmos and things in between. I realized there are three Virginia cities: Virginia City in Nevada, one in Montana and one in Mexico that is an extinct ghost town. While passing through these regions, and right at the four corners, I felt the spiritual power in the Virginia Cities,” recalls DeVille.

When fate aligned him with the members of the band, the name was only natural. And if anyone missed the message of this band, DeVille has no problem enlightening them.

“It’s not just about music, selling records, T-shirts and all that other b.s. other bands are doing,” explains DeVille. “Some people have a hollow mind, they can’t see past their own selves. On top of that, everything is sold to them – the whole protocol and paradigms ... we’re here to break that. Like the New Musical Express Awards.”

Recently the band rode a flat bed truck to the New Musical Express (NME) Awards at the El Rey Theatre in Los Angeles. The outfit parked parallel to the red carpet just as Alice Cooper was passing. The performance turned all cameras their way leaving reporters wondering: “What the heck is going on?!”

DeVille blasted sermons through his megaphone, while Sister Gaby jumped off the platform and rushed the entrance only to be chased by security. They weren’t able to join the festivities, but they caused quite a stir.

“We were hoping to get in and didn’t want to appear as if we crashed them. But even that is an act of shaking things up. It’s about smiling and breaking people out of certain norms. That’s what we try to do with our music and our legal church [Dawn of the While Light Ministries],” says DeVille. “It’s probably as California as anything: we’re a band, and we’re also a church. It’s not a religion though; it’s more like a Buddhist all-encompassing type of creed. The message is about practicing goodness to humanity, entertaining one’s self, be creative and be good to others.”

One day the band hopes to make a pilgrimage to Virginia City, Nev. “Of course that’s in our own minds. Perhaps we’re completely out of our minds, which might be the case, but that doesn’t matter. We’re here to entertain, we’re here to take it to the people, and we’re here to help,” DeVille declares. “This whole ‘make music to get a record deal, to sell music’ really doesn’t matter to us. When you wake up in the morning, what’s going to impact the world? That’s what we think about. You can follow the fucking rat race and be begging for a nickel or anything else. We say whatever. I’d rather sweep up leaves and buy corndogs and go out with my band and give them to people.”

A Farewell to George W. Bush and his Administration is currently available. VCR will perform May 8 at Malibu Inn, Malibu and Memorial Day weekend at the Topanga Days Fair. For more information, visit www.thevirginiacityrevival.com.