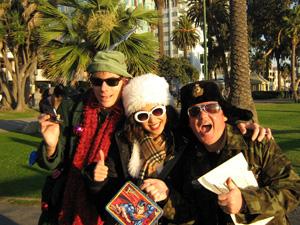 Forget that swing sets and monkey bars ever existed because Midnight Madness in coming to life, and Hollywood Boulevard is your playground! Holding claim to Michael J. Fox’s first movie role, the oft-forgotten guilty pleasure is 1980s cinema at its finest.

As only the second Disney movie to garner a PG-rating, Midnight Madness follows five teams of carefully selected college kids as they battle across Los Angeles, solving clues and wreaking havoc on city landmarks in a game created by an eccentric graduate student and appropriately dubbed “The Great All-Nighter.” This Saturday, American Cinematheque is honoring the cult classic with a screening/interactive scavenger hunt combo-drive adventure-filled community event.

The madness starts mid-day (not midnight) at the Egyptian Theatre with a high-tech, real-life urban game that includes superhero lunchboxes, Web-enabled cell phones, notes possibly taped under benches and creepy strangers who are actually clue-carrying actors. Thanks to San Francisco-based the Go Game, you and your crew will spend two hours chasing down cryptic messages, sending evidential photos to game control and completing missions inspired by the movie that started it all. When the Hollywood hunt is over, cast your votes – via cell phone – grab a bite to eat and report back to home base where the winners will be announced right before the screening.

Somewhere between Rat Race and Animal House lies Midnight Madness, where the football team captain jumps into a vat of Pabst Blue Ribbon during a factory tour and the fat, lazy, rich slob ruins his clue-solving computer by using it to hold his marshmallow stash. The nerds ride around on matching white mopeds like debate team cavity-fighters, while the game’s creator (who looks like a modern-day American Apparel employee) sits in his Hollywood Tower apartment surrounded by police radios and a giant light-up strategy board.

Don’t miss this opportunity to interact with your city like never before and watch a movie you never knew you forgot existed. Wear matching turtlenecks and get bonus points with the director, who will also be competing in the pre-screening scavenger hunt.