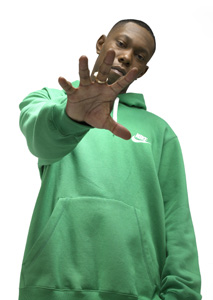 A rapper once bragged, “I spit hot fire,” in reference to his flow on the mic. But that guy never met the UK’s Dizzee Rascal. Dizzee – otherwise known as Dylan Mills – is a 23-year-old rap/rock phenom with a voice stronger than that of Chuck D.’s from Public Enemy and rhymes that rival Mike Skinner’s (the Streets).

After having burst onto the scene in 2004 with the breakthrough track, “Fix Up, Look Sharp,” Dizzee was poised to take both the hip-hop and indie music worlds by storm. He toured with Jay-Z, made appearances on MTV’s “Subterranean” and graced the covers of magazines the world over.

However, the release of his follow-up effort, 2004’s Showtime, failed to ignite the spark that his debut, Boy in da Corner, had created. Dizzee’s next release would have to be different.

So, it was back to the drawing board. The end-result of his hard work is the LP, Maths + English. Here, hip-hop’s l’enfant terrible is back and brighter than ever.

The disc is complete with 13 incendiary tracks that take a death-grip to listeners, refusing to let go. Titles like “Paranoid” and “Temptation” showcase a wiser yet slightly more jaded artist. Still, the sound is noticeably different from what we in the states recognize as “rap music.”

Dizzee is well aware of the difference existing in each scene.

“Rap in the UK is still trying to find its own identity,” he explains. “Any hip-hop will always have to kind of look at America first.”

While he clearly reveres rap’s American roots, there have been reports of comments made by Dizzee in regards to Jay-Z’s upcoming performance at England’s Glastonbury Festival. The concert is much like California’s Coachella Music and Arts Festival with one decidedly different detail: It’s a predominantly rock-oriented event.

The Internet has been abuzz with headlines like, “Dizzee doesn’t get Jay-Z’s addition to Glastonbury roster.” But the rapper is quick to shoot down the underlying implications of those articles.

“I’m actually a Jay-Z fan,” he admits. “I’ve got some of his songs imprinted on my heart. I’ve been workin’ it. I’m trying to get tickets to that shit at Madison Square Garden with Mary J. Blige.”

The truth of the matter is, Dizzee was surprised – yet pleased – at the addition of Jay-Z to the line-up. He notes that with the exception of his own performance there with the Arctic Monkeys last year, he’s not aware of any rap artist taking Glastonbury’s stage.

And what about Dizzee’s collaboration with indie rock’s finest? Is he more partial to producing other acts or performing?

One thing he does know is that he’s placed a lot on his newest effort to propel him to the status as a musician that he so craves. Having toured across the world within the past few years (and currently making the rounds through the United States with El-P) Dizzee admits to having a taste of fame but wanting more.

“It don’t really matter where I blow up, just as long as it happens,” he says.

He does, however, draw the line at feeling pressured to achieve big numbers stateside: “I’m a lot less pressured and a lot less crazy about it.”

Instead, Dizzee focuses on his future with a pride that only comes from knowing that you’ve put in a hard day’s work. As he speaks about “Sirens,” his favorite track on Maths + English, he manages to show that rap’s not just about the bling and the booty; it’s got heart as well.