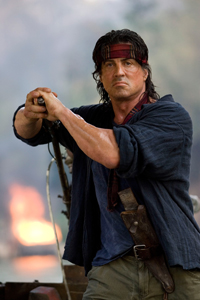 Of action films filled with greasy vigilantes traveling around the world and blowing things up with M60s, John Rambo is the indisputable king. Sylvester Stallone turned the mentally unstable, former Green Beret into a household name with 1984’s First Blood and built an ass-kicking franchise that has spanned two decades.

In honor of the belated fourth installment of the Rambo series – where Stallone looks better at 60 than we could pray for in our prime – being released on DVD as part of a six-disc Rambo - The Complete Collector’s Set, Lionsgate is putting the original action hero back on the big screen.

For one night only, from Puyallup, Wash. to Jensen Beach, Fla., Rambo: First Blood will be playing in local theatres in a nationwide salute to the “one-man war” that started it all. This one-time-only event boasts a digitally re-mastered presentation, exclusive interview with Stallone and an alternate ending that, according to the filmmakers, “could have changed Rambo’s theatrical history forever.”

Over 400 theatres are participating, almost 30 in our area alone, so there’s no excuse to miss this one. And for those not afraid of 60-foot tall, gun-toting Vietnam veterans, Irvine and Ontario are hosting the event on IMAX screens.

So free up the night and pick a theater, because even though watching the classic might make you impatient for the box set, just remember that, as the tagline for Rambo IV says: “Heroes never die ... they just reload.”