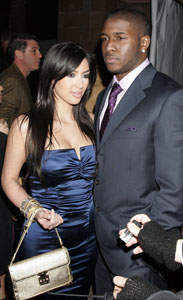 Tom Brady and Giselle Bündchen: They’re not DiMaggio and Marilyn, but Tom and Giselle have been the “It” couple ever since he started winning Super Bowls and became the Golden Boy of American Sports.

Kim Kardashian and Reggie Bush: Proud to be dysfunctional, their on-again off-again relationship has been featured in Kim’s reality TV show “Keeping up with the Kardashians,” which is about as enjoyable as watching Reggie disappoint Saints fans every Sunday.

Tony Romo and Jessica Simpson: Regardless of whether she jinxes him just by showing up, Tony and Jessica are still going strong, even if it’s against President Bush’s best wishes.

Nomar Garciaparra and Mia Hamm: Both athletes, Nomar and Mia have been married since his days in Boston and now run sports camps for kids during their off-seasons.

Anna Kournikova and Enrique Iglesias: Representing the fact that the lady can be the athlete in the relationship, Anna and Enrique met on his music video shoot and have been together ever since.

Mehmet Okur and Yeliz Caliskan: The best and most functional celebrity couple might be the one you don’t know about. He’s the starting center for the Utah Jazz and she was a former Miss Turkey. They just celebrated their first child.

Matt Leinart and Anyone: Whether he’s been seen with Britney, Paris or Lindsey, Leinart has become this generation’s Joe Namath. Sadly for Cardinals fans, he isn’t the same “player” on the field as he is in the clubs.