Marko Jaric: From L.A. to Minnesota, the International Guard's Eyes Are Set On Success 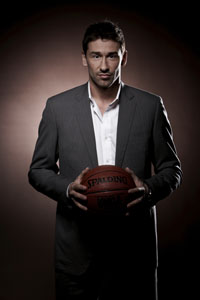 While chatting with Minnesota Timberwolves guard Marko Jaric as he navigates New York City’s rush hour, it’s easy to see where our two lives diverged down different paths. Though him and I both spent much of our childhood watching and loving the game of basketball, dreaming of one-day becoming NBA players with money in our pockets and beautiful women on our arms, reality eventually set in for both of us. Luckily for Jaric, his reality includes all that and more.

As the son of the famous Serbian basketball player, Srecko Jaric, Marko developed a love for the game at an early age. But at a time where many of the best international players were one-dimensional shooters, Jaric looked to the NBA and Magic Johnson to understand how size, speed and athleticism would play a part in the next generation of basketball.

“All the young guys and all the Europeans have idols in the NBA players. I remember I would need to stay up until two, three a.m. to catch [an] NBA game.”

Jaric’s late nights studying the Showtime Lakers, as well as his talent and determination, led him to become one of the best international players available at the 2000 NBA draft. After separating himself from the crowd with a celebrated career in the Italian leagues, which included two championships, he was picked 30th overall by the Los Angeles Clippers.

However, his road to NBA success hasn’t been as simple. After three frustrating seasons in Los Angeles, Marko was shipped to Minnesota in exchange for guard Sam Cassell.

Now with the Timberwolves, a squad that seems to be perpetually rebuilding, it has been difficult to match the success that he found earlier in his career.

“The rebuilding process can sometimes be very painful and very long,” he adds. “There’s a lot of NBA teams that were really building for 10-15 years and never get to the playoff picture and never get any results.”

After watching Kevin Garnett get traded away to Boston last summer for what seemed liked spare parts, it was difficult for Jaric and his teammates to enter yet another stage of rebuilding. However, the emergence of Al Jefferson as a legitimate superstar alongside Minnesota’s impressive young talent this past season has brought promise to the future of the franchise.

“I need to say that I didn’t expect when we made the big trade that we would be getting this kind of talent,” Jaric admits. “I’m just hoping that the team is going to continue to improve and pretty soon we’re going to be a playoff team.”

It doesn’t hurt that the Minnesota front office is staring at a top pick in this year’s deep NBA draft, either. While Jaric admits to not watching much college basketball due to “tradition,” he is excited at the prospect of yet another top prospect joining the Timberwolves next season.

With the tools and teammates in place to finally compete, Jaric is taking time to enjoy all the things that come along with his NBA dream. Besides the paycheck, his relationship with girlfriend and supermodel Adriana Lima has become a hot topic recently. While the often-private player declined to talk about their time together, Jaric has been spotted scouting engagement rings during his current off-season.

So though our conversation might be the closest I come to NBA stardom, things seem to be going pretty well for Jaric. Still, as he watches good friend and former Italian league teammate Manu Ginobili rack up championships in San Antonio, Jaric has been busy coming up with a new list of goals for himself and his team.

“I’m still moving forward. I’m still very hungry and there are a lot of goals that I’ve put in front of myself that are unachieved. Playing for [a] good team, making a good playoff run and trying to achieve as much as possible.”

With a little bit of luck, Jaric’s goals seem to be well within his reach.