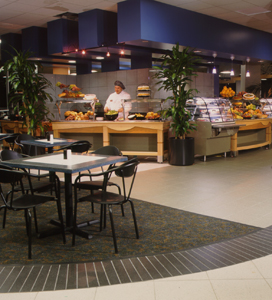 Good thing that UCLA has a wide selection of food that allow for quality dining for its residents. Unlike many other universities, which only have one or two dining halls on campus, UCLA has four dining halls (De Neve, Covel, Rieber and Hedrick), as well as four cafés/eateries (five if you count Rendezvous as two).

The eateries are separated by the types of food they serve. The main one is Bruin Café, which serves sandwiches, salads, coffee, tea and smoothies and is often open late. There’s also Puzzles, which serves a hodge-podge of food and dessert (most notably Häagen-Dazs ice cream); Crossroads, which is designed like a ’50s diner and serves hamburgers, hot dogs, fries and shakes; and Rendezvous, which has a Mexican side and an Asian side (which is why it could count as two restaurants).

And that’s just the start. The main place residents frequent is any one of the dining halls on the hill. Each dining hall has a “theme” that they only very loosely stick to; for the most part, they serve a variety of dishes, from Risotto with Shrimp and Asparagus to Spinach Rustica Pizza.

The sheer number of different dining halls and eateries ensures that people can always find something they want to eat (you can check the menu online beforehand if you’re picky). If you’re a little short on time because you have a midterm to study for or an essay to write, the eateries are a quick way to bring some food back to your room.

And the food is good by dorm food standards. Instead of the standard cafeteria lineup where someone slops a suspicious-looking something onto your plate, it feels like the chefs actually try. Rather than serve the same stuff every day of the week, the dining halls offer different dishes for every meal, too. You won’t come back the next week and see the same food from the week before, either. The dishes rarely repeat within a month, and even beyond that they don’t reappear too often.

The eateries, on the other hand, offer a set menu for every day of the week. On the one hand, you lose the variety of the dining halls, but it allows for quick take-out when you don’t have time to sit and eat.

The final treat that the dining halls offer is theme dinners. Twice a school year, the dining halls pick an interesting theme (such as “Mardi Gras”) and cook food that relates to it. It’s a great chance to try some very delicious food that would otherwise not be on the menu.

For those who like food (and who doesn’t?), UCLA has plenty to offer. Granted, dining hall food tends to taste the same after a while, but at least for the first year or two you can treat your palettes to something good.