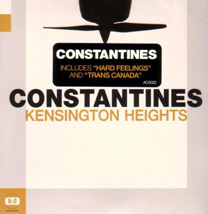 Donning blue collars all around, Constantines represent the ideal man’s balance of toughness and sensitivity; every touch is deliberate and firm, and each of Bryan Webb’s lines are sung with a gruffness that only trembles upon the closest listen. As with their three records prior, Kensington Heights is as perfect on 20th listen as it is on the first.

The record is somewhat divided by wallowing ballad “Time Can Be Overcome,” and with the exception of listener-friendly “Brother Run Them Down” and “Credit River,” “Time” is the point at which the album officially becomes top-heavy due to the slowed tempo of its second half – a bold and rare move for a band which usually alternates before ending on a folk ballad.

“Million Star Hotel” is blaring and bluesy, while “Trans Canada” builds up and bursts into a fantastic, all-out fighting effort. “Shower of Stones,” sung by guitarist Steve Lambke, is miraculously thrilling and terrifying, its wall of guitar and rolling tom drums mimicking a blast of rocks tumbling down a cliff in sheets.

And “Our Age,” perhaps the best offering here, is to Kensington Heights what “On to You” was to Shine a Light. Its chorus releases a level of passion in you that you didn’t know existed, and quite inexplicably at that.