How the Garcia Girls Spent Their Summer: A Crash Course On Love 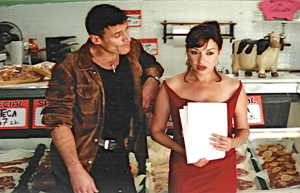 The Garcia Girls consist of three generations of women from a Mexican-American family who are living in a hot, dry, Arizona border town. On the surface, their lives seem to be routine and predictable at best, each going through the motions of her day to day life. We soon discover, however, that there’s more going on behind the scenes than appearances would imply.

The fun begins when Dona Geñoveva (Lucy Gallardo), the matriarch of the family, buys a car she cannot drive and finds herself very attracted to the man she hires to teach her. Her daughter, Lolita (Elizabeth Peña), finds herself being the next target of the local Casanova and her granddaughter, Blanca, (America Ferrera) finds a boyfriend.

They are three women about to discover their next lover, their first lover and at least for one, possibly her last lover. Their actions and interactions spin an entertaining tale about life, family and sexual discovery.

Although love and desire certainly power the film, it’s also about the emotions that motivate us and the external aspects of our lives that guide our choices.

The source of the subtle yet effective comedy in the film is obvious when you hear Reidel talk with bright enthusiasm about her writing process and the events that planted the seed for this story. She got the idea for the story when her own grandmother let it slip that she actually wanted a car for Christmas one year.

“She was in her seventies, she had never learned how to drive, she never had her own car and I just wondered why she wanted a car. In my head, what you see on the screen is what would have ended up happening,” Riedel laughs.

Men are represented here in many of the characters from lover to swinger to romantic hero. The grandmother’s car represents the male aspect intruding in their lives, and it serves as the catalyst that begins the adventure. Far from being a chick-flick, How the Garcia Girls Spent their Summer appeals to a diverse audience.

“It’s about love and it’s about sex and it’s about cars,” says Riedel. “I knew guys would be coming with their girlfriends or maybe because they are fans of Elizabeth Peña or America Ferrera, and I definitely gave a nod to the male perspective. It had a whole female perspective, and I thought it shouldn’t be so lopsided, so I gave it some testosterone!”

The film does not boil over with sex and bawdiness, but instead simmers with passion and desire. It’s a gentle, loving look at three single women and the lives they lead during one very hot summer. It’s a look at the directions they head in separately as women, and together as a family.

How the Garcia Girls Spent their Summer releases in select theaters May 16.