Famke Janssen: Sinks A Winning Shot in Turn the River 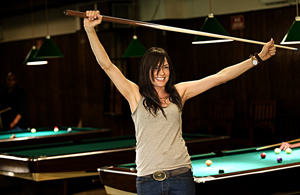 Kailey (Famke Janssen) is a hard woman. She barely gets by making money as an amateur gambler. She lives in a pick-up truck that she won in a poker game, and she exists primarily on doughnuts, cigarettes and beer.

Her world is a blurry mix of pool hustling, whiskey shots and hard knocks. She’s tough.

There’s a flip side to Kailey, too. She’s also a loving, devoted mother. She gave up her son Gulley (Jaymie Dornan) at birth, but she has recently been in touch with him, and they’ve been meeting secretly. Kailey quickly realizes what she has to do, and with the help of a gritty pool hall owner named Quinn (Rip Torn) she’s going to use what few skills she has to get her son back.

Like a mean-looking dog that rolls over for a belly scratching, Turn the River proposes to be a hard, dark film on the surface, but is really much more than it appears.

“Even though it is very much about pool, more so it’s a movie about the story between a mother and her son,” Janssen says. “That’s what really attracted me to playing this character. It’s such a beautiful story between the two of them.”

The game of pool also features quite prominently in the movie. All of the characters revolve around one main pool hall, and the outcome of the film depends upon a “big game.”

Janssen’s abilities are impressive in this area – no trickery involved. She actually plays a mean game of pool.

“I learned to like it, but it wasn’t something I was familiar with. I had never done it,” she tells. “I had to be trained for the movie, specifically, to pull off all of my own pool shots. That’s something Chris [writer/director Eigeman] and I talked about, to do all of my own shots. People are too clever. If you don’t do all of your own shots they’ll freeze frame it and go ‘wait, see there’s a cut in there somewhere, and I noticed it.’”

There was one particularly impressive shot that banks five times before sinking in the pocket, done in one continuous shot with no cuts.

“There was a lot of pressure in getting it done in the time we had. I had to learn to play pool, and I had to learn how to play shots because there was only a certain window to get it done in. There was so much pressure. People were placing bets against me and they mapped out a whole day for me to make this shot because nobody thought that I was gonna be able to make it let alone [make it] in a few takes. I made it in the first shot,” she gushes.

Janssen has been on TV shows and in big and small budget films, like “Nip/Tuck” and the X-Men movies. She’s most comfortable these days as an actress in smaller independent films, but admits that the genre does have its challenges.

Janssen spells it out: “The majority of my work is in independents now. You just try your best. We don’t have the budgets behind us that all the big studio films have. We really rely on word of mouth, and we hope that the film people will keep us in theaters long enough so that by the time people spread the word we are still in the theater. These are the things we are up against.”

Turn the River releases in select theaters May 16.