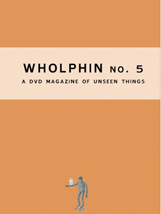 The idea behind the Wholphin DVD series is to provide a venue for interesting short films, which wouldn’t ordinarily reach wider audiences. The films may be considered too weird, disturbing or potentially subversive.

Whatever the case, we can trust the folks at McSweeney’s to choose an interesting selection. In the latest release, number five to be exact, there are 12 films, all thoroughly entertaining in their own way.

Stand-outs among the bunch include Piece by Piece, a documentary on the exciting world of Rubik’s Cube, or Cubing. These young geeks, I mean geniuses, will blow your mind with how fast they can solve a disarranged Rubik’s Cube.

The avant-garde short film Shot Through features a standing drumset in the middle of a serene meadow before a fantastic clattering of gunfire. Other films in the series take on a more serious tone.

American Outrage documents the appalling true story of a family of Shoshone Indians whose land is invaded by federal agents and sold off to mining interests. The events, which occurred only in the last few years, received little to no attention in the U.S. media yet received official condemnation by the United Nations Counsel on Human Rights.

In this way, the chosen films in the Wholphin series offer both entertainment and important social commentary.

A Wholphin subscription lasts for four issues. You’ll receive No. 6, plus the three subsequent issues. Issue No. 6 will ship late summer 2008. For more information, visit store.mcsweeneys.net.