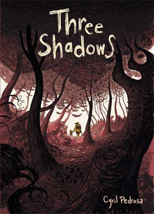 Lise and Louis live a simple, idyllic farm life with their son, Joachim. One day three shadowy figures on horseback appear on the horizon. It soon becomes apparent that they aren’t just passing through.

French comics artist and former Disney animator Cyril Pedrosa crafts a fable about the fear of losing what we love most, striking an interesting blend of whimsy and dread. Actually, it looks and feels a lot like a Disney film, the panels unfolding through key actions like a storyboard layout.

The story is a tad too simple to sustain its length, but the scenery is beautifully rendered and the characters inventive enough to keep you invested.