Say No More: Not Lost For Words 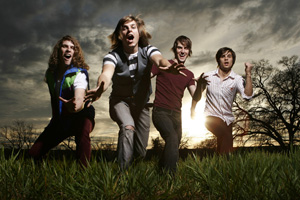 A bunch of dudes growing up together in a middle-of-nowhere town, raised on cattle ranches and Garth Brooks, come together to play indie acoustic rock, discover flatirons, get signed to the record label of their dreams and make the big move to Los Angeles to fulfill their dreams of rock stardom. So goes the typical Midwest modern rock fairy tale and so goes the story of unassuming, pretense-free, nice-guy foursome Say No More.

Oh, except these boys next door are actually California natives. While being a West Coast band void of egotism or entitlement issues is a noteworthy feat in and of itself, the Salinas-bred rockers are slow to sing their own praises. Humble as they are, guitarist Peter Holbert, vocalist Peter Pedrazzi, bassist Jon Rasmussen and drummer Tim Spier can take pride in doing at least one thing that precious few other bands are focusing on these days: they’re planning to be around for a while.

Though the lead up to getting signed to Drive-Thru was a storybook tale for the band, who had their sights set on the label from the start, Pedrazzi admits it stopped there, after which the real work subsequently started.

“There’s a natural order to things,” Pedrazzi starts. “It’s the same as when you pick up a guitar when you’re young and think you’re going to be the next Jimi Hendrix. When we were young, Drive-Thru was the coolest thing ever, but when you work for someone, it’s different because the romance is gone. We’re friends and business partners now, so it’s not as intimidating anymore.”

The band may not be as awestruck by their label as they once were, but that’s surely not to say the process of writing their debut album, What You Thought You Knew, was a walk in the park. They found themselves with high expectations to live up to and, not infrequently, found the product they were delivering didn’t always meet demands.

“People ask what it was like to have the freedom to take a year to write this album,” says Pedrazzi, “but the long approach for us was because we have a learning curve. It didn’t take us long to actually write the 10 songs on the album, but we had to scratch the first 20 we had learning how to write songs.”

Not ones to crack under pressure, though, Pedrazzi and his band mates took in all the criticism when shifting their approach and finding the path that worked best for them.

“I started using a thesaurus,” Pedrazzi says with a laugh. “I had trouble with making things too vague. In my mind, all the pieces fit, but not for a listener who doesn’t know anything about it, so I had to learn to make songs that were more detail-oriented, setting up visual pictures lyrically, rather than really cool phrases and wording.”

With an album under their belt now, the next step them is conquering the road.

“We haven’t been on the road that much yet, so we haven’t been jaded by it and playing shows is the greatest thing ever for us,” he says.

Again, Pedrazzi is quick to admit that even in that, his band is still learning the ropes.

“We don’t have it all figured out. We’re learning every single day how this all works. We don’t have a gimmick,” though he jokingly adds, “we’re all really nice.”

Above all else, though his band is quickly soaking up all the knowledge and experience they can in a sometimes disillusioning industry, Pedrazzi is clear the music itself has yet to lose its magic for his band and is more than enough to keep them going.

As he says, “When you see Say No More play, you see four of the happiest people you’ve ever seen in your life.”

What You Thought You Knew will be available May 20. Say No More will perform May 16 at Cobalt Café, Canoga Park and May 23 at Chain Reaction, Anaheim. For more information, visit www.saynomorerock.com.