Super Size Me Feels No Heat from Fahrenheit 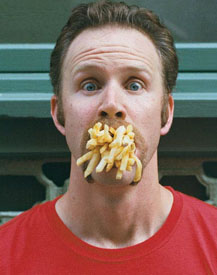 Super Size Me filmmaker Morgan Spurlock is feeling a bit jittery and sleep-deprived, but can’t blame his condition on fast food this time.

The 34-year-old director who made a splash in 2004 by chronicling his 30-day diet of McDonald’s meals is over the moon about his first Oscar nomination in the documentary feature category. Spurlock was in his New York apartment when he learned the good news from a posting on the Oscar Web site.

With an impressive $11.5 million at the box office, Spurlock’s "little film" he made for $65 thousand is a strong contender to take home the Oscar statuette. The documentary about the effects of fast food will compete against Born into Brothels, Tupac: Resurrection, The Story of the Weeping Camel and Twist of Faith.

Conspicuously absent is Michael Moore’s anti-Bush documentary Fahrenheit 9/11, which Moore opted to submit into the best picture and screenplay categories, a gamble that will pay off for Spurlock or one of his competitors.

"(Fahrenheit) is a great film that made an impact and inspired people to register to vote," Spurlock tells Zap2it.com in a phone interview. "It would be a completely different race if it was in it."

Regardless of the outcome, the filmmaker is thrilled with the public’s reception of Super Size Me and documentary films in general.

"The last year has been amazing. Go back a year and day, and we were at Sundance. Now, a year and a day later, it’s done phenomenally. We’ve reached a place where we want something different. We want truth and reality – non-fiction film is the last bastion of free speech – to help inspire, to drive toward the greater good."

Although Spurlock is back to his pre-Super Size Me weight of 185 pounds – thanks to his fiancee Alexandra Jamieson, a vegan chef – he’s isn’t quite ready to leave his fast food film behind.

"I’m working to get an educationally enhanced version (of the DVD) out. We’ve cut the scenes out that would be offensive to kids, like my rectal exam and comments on my sex life," he says.

Spurlock hopes to interest nonprofit organizations and have the new DVD out to schools within the next couple of months.

The winner of the feature documentary award will be announced along with the 23 other category winners on Feb. 27 and televised from the Kodak Theatre in Hollywood.