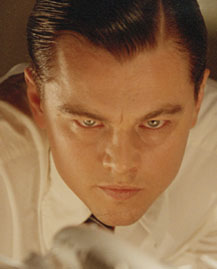 This year’s Oscar bout will pit the obsessive-compulsive pilot vs. the lady boxer.

When the glitter had settled on the Oscar nominations, The Aviator pulled in 11 in all, including best picture and nods for stars Leonardo DiCaprio, Cate Blanchett and supporting actor Alan Alda as well as for director Scorsese, who has never won a best-director or best-picture Oscar.

Million Dollar Baby racked up seven nominations, including best picture, for Eastwood as both director and actor, Hilary Swank for best actress, and supporting actor Morgan Freeman. Already billed as the "sentimental favorite," Freeman has never won an Oscar either.

Swank and Annette Bening will face off for the best-actress Oscar for the second time in five years. In 2000, Swank won for Boys Don’t Cry, beating Bening in American Beauty. This time, Bening was nominated for Being Julia.

"I knew when I read the script that it was special," Swank said Tuesday of Million Dollar Baby. "It was a rare find."

Kate Winslet earned her fouth Oscar nomination for Eternal Sunshine of the Spotless Mind and had a hard time containing herself.

"I can’t believe it. I am ecstatic! This nomination means so much to me. To be remembered for a film that was released a while ago. .... I am unbelievably honored and completely overwhelmed."

Oscar didn’t totally dodge the year’s most controversial films. While Michael Moore did not want Fahrenheit 9/11 considered in the best-documentary category and thus shut himself out of any Oscar chances, Mel Gibson’s The Passion of the Christ, a runaway hit in spite of complaints about its violence and alleged anti-Semitism, picked up nominations for music, makeup and cinematography.

Also picking up three nominations was director Mike Leigh’s sympathetic story of a 1950s back-alley abortionist in Vera Drake, which was recognized in the best director, best actress and best original screenplay categories.

Eastwood’s surprise best-actor nomination meant that Liam Neeson (Kinsey), Giamatti, Javier Bardem (The Sea Inside), Jim Carrey (Eternal Sunshine of the Spotless Mind) and Jeff Bridges (The Door in the Floor) will have to wait for another day.

"It’s a dream for everyone who wants to be a movie maker," to land an Oscar nomination, said Christophe Barratier, director of best foreign language film nominee The Chorus.

"This is, like, crazy," best supporting-actress nominee Natalie Portman told the Associated Press. "How did I get so lucky to have an amazing experience – have a film (Closer) I’m really proud of – and then also get recognized by our own community?"

With Moore out of the documentary field, Morgan Spurlock’s hilarious hit Super Size Me, about one man’s attempt to ruin his health by eating nothing but McDonald’s food for a month, emerges as a favorite.

The first tally of the nation’s oddsmakers put The Aviator, Foxx, Swank and Scorsese as the early favorites.

The Academy’s juggling of Oscar’s nomination and show dates to minimize the impact of earlier awards didn’t totally obliterate the Golden Globes from the Oscar landscape. Alda, best actress nominee Catalina Sandino Moreno (Maria Full of Grace) and best supporting actress pick Sophie Okonedo (Hotel Rwanda) did not figure in the Globes’ balloting. But pretty much every other Oscar nominee earned a Golden Globe nomination first.

The best picture and best director races will pit Hollywood royalty against the director’s director, Eastwood vs. Scorsese.

But the lack of blockbusters in this year’s nominees could spell trouble for the Oscar telecast, to be hosted by Chris Rock.

"I think you’re looking at a low-rated show, because rooting interest in the races is a big reason to watch," says Steve Pond, author of The Big Show: High Times and Dirty Dealings Backstage at the Academy Awards. " If there aren’t movies nominated that a lot of people have seen competing for the top awards, people don’t watch."

Still, Pond says, with Chris Rock hosting, "people may tune in just to see what he does." Rock, for his part, has joked that if Jamie Foxx doesn’t win for Ray, he’ll "take an Oscar from one of the sound or light people that win and give it to him."

The 77th Academy Awards will be broadcast Feb. 27 on ABC.