Hipsters No More: Proternatives Unite!: A New Tag for a New Scene 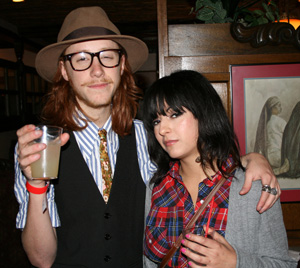 The Mod black hairdos, the trashy chic clothing, the loose, airy, carefree gesticulations, the tight Britpop pants, the crazy hats … one girl is even dressed in an outfit that looks like it was collaged from The Last of the Mohicans, a Rick Ocasek theme party and a grunge rock concert. You have to shout above the DJ’s music in order to have a conversation. It could quite possibly be the loudest Mexican restaurant known to man.

People jump up and down while engaging in elated hugs. There appears to be an abundance of joy.

“Ethan, how are you?” a stunningly cute girl sporting a fake moustache says to a newcomer.

She looks like Feist – but with a moustache. She’s being ironic. Irony is a big part of what people have pejoratively defined as being a “hipster.”

The area is urban, edgy, real. You can smell dried urine from a nearby bus stop.

If you believed in the term “hipster” you might call this a hipster haven. The block possesses the perfect blend of working class reality, ’30s architecture, indie music venues and ironic drinking establishments.

Just down the road from Barragan’s is the Echo (1822 Sunset Blvd., Echo Park). A Moby doppelganger or perhaps the actor who plays the fragile one in High Fidelity – it’s a toss up – opens the Echo’s front doors to reveal band equipment piled in front of a wall of pleather green couches, making it impossible for people to sit on them.

On the other side of the club, the men’s bathroom sign has fallen off the door and instead of replacing it someone has written “MEN” with a black sharpie.

On stage a female keyboardist picks up a tambourine. She looks like a Chloë Sevigny wet dream fantasy straight out of an American Apparel ad, wearing white shorts that are two sizes too small for her, a tight white T-shirt and shin-high striped socks.

She sings with a disaffected but angelic voice and carries herself with what appears to be either sensual nonchalance or seductive nihilist indifference. The band’s female drummer sports a similar outfit and attitude.

The two politely apologize to each other then continue watching the band, who give off the vibe of being humble, progressively-minded rock stars; not escaping with their music but engaging.

The crowd is mild-mannered, polite and enthusiastic. There are more than two KXLU bags placed on tables or slung over swaying shoulders.

INDIE ELITISM OR OUR GENERATION’S COUNTERCULTURE?

In the past decade the term “hipster” has been exhumed from the mid-20th century and used like a verbal zombie to covertly infect our generation’s voice of opposition to mainstream, consumer-obsessed culture. A more accurate term would be “scenester”– an individual who is more interested in a scene’s aesthetic than its philosophy.

Scenesters are nothing new; they’ve existed in every era and every counter and sub culture movement in modern American history.

The amount of venom, however, that’s currently being thrown around for these people has spilled onto a group of individuals whose only crime is standing up for progressive change and seeking out alternatives to the cultural void we as Americans find ourselves in at the beginning of the 21st century.

By Merriam-Webster’s analysis a counterculture is “a culture with values and mores that run counter to those of established society.”

Wikipedia goes even further to explain that a counterculture movement “expresses the ethos, aspirations and dreams of a specific population during an era – a social manifestation of zeitgeist.”

It is true that there are a few individuals who are annoyingly pompous and righteous in their self-proclaimed mastery of the indie art, music and fashion scenes, but I would suggest that by so carelessly slinging around the term “hipster,” we are silencing a needed voice of opposition and stripping our generation’s counterculture movement of its power.

It’s time to fill this word’s belly with a jar of sleeping pills and put it to bed. Before we can do this, however, we need a replacement term that defines a group of people who embrace forward thinking social and political values while engaging in the celebration of innovative independent music and a bohemian fashion aesthetic.

This term will define a scene that is progressive in its ideology and alternative in its nature. We should no longer maliciously employ the word “hipster.”

We should address our generation’s counterculture by a new title that I submit to you, the people, for approval: “PROTERNATIVE.”

I, for one, will be the first to say that I am proternative and proud, and I support the proternative movement. For those of you who want to continue to rag on so-called “hipsters,” I’m calling you out as mere bullies all grown up, bitter and lonely.

– You’re more interested in being hip than experiencing the joy of discovering an untapped musical gem that you won’t hear on mainstream radio.

– You’re wearing that hat from another era in order to gain acceptance by others.

– You think irony is awesome because it makes you look clever.

– You feel a debilitating need to dress a certain way, take pornsite-esque Polaroid photos for American Apparel or exclude others from your party because they’re not as uncool cool as you.

– You’re interested in both indie music and environmental issues.

– You use irony as a tool to expose hypocrisy.

– Your fashion sense is somewhere between vintage Robbie Robertson and seafaring Jack Sparrow because you’re tired of corporate leisurewear and you envision a world with people who place more value in social interaction and conversation than 401ks and big screen TVs.

– You drive a car fueled by vegetable oil or go out of your way to power your house at least partially with solar power. Bravo.

– You have a job that allows you time and money to seriously pursue your creative aspirations. Anyone who’s seen The Graduate will agree that a career in plastics is not the first step on the road to enlightenment.

Now that that’s settled, I want all the proternatives left in the room to stand up, go to the window, open it, stick your head out and yell: “I’m mad as hell, and I’m not going to take this anymore! I’m not a hipster! I’m a proternative, and you can kiss my socially conscious, culturally engaged, alternative arts enthusiast ass!”