Ali Larter: Dances Towards Her Destiny in Final Destination 2 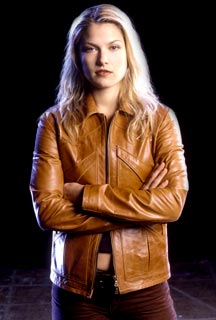 On the second floor of the Four Seasons on the Saturday that the Golden Globes awards are presented, Ali Larter is dancing through the hallway in a black dress. Her right arm is clutching a dozen red roses, and her left arm is wrapped around a male assistant of hers, who reluctantly goes along with it.

With her film career established in such films as Varsity Blues and Legally Blonde, this tall blonde clutches the roses and smiles like a diva that has been given an encore.

Except this encore is a second go-round as her character, Clear Rivers in the Final Destination 2, the sequel to the 2000 thriller.

"This is for the fans of the first one," Ali says. "Hopefully, what they loved about that [movie], they're going to get ten doses of in this one." In Final Destination 2, Larter is the only surviving passenger from the fateful midair plane explosion from the first film. In the sequel, the premise remains the same; here, a teenaged girl named Kimberly (A.J. Cook of The Virgin Suicides) has a vision of a fateful freeway accident while driving. Instead of letting fate take its course, Kimberly holds up traffic and prevents those who were slated to die to continue living.

Of course death finds its way to them anyway, leading Kimberly to track down Clear Rivers in her padded cell in the local insane asylum and enlist her help on preventing future deaths.

"I was really glad to hear that she was coming back," says Cooks about Larter’s return. "It was nice to have those two strong female characters in the same movie,

because that doesn't come around too often."

In real life, Ali says that she sees herself as a strong human being. Born and raised in the Philadelphia suburb of Cherry Hill, New Jersey, she left home at the age of thirteen to start a career in modeling. However, she quickly outgrew that career.

"I didn't believe that modeling was enough for me, and being out here (in L.A.), it just settled into me that it's not that important," Ali says. "It's all about being healthy; it's about taking care of yourself."

Her role as Clear allowed Ali to not wear any make-up or have her hair done. She feels this gave a realistic side to the character by showing flaws in her appearance.

"I love flaws," Ali says. "I think it's what makes people beautiful." Ali says that her biggest flaw is that she is lazy, which she says is the result of being waited over hand-and-foot by the studios. "Lazy is tough," she says. "You become lazy in this business when you're not forced to do things."

Despite this self-assessment, Ali has pushed herself to take on more demanding roles in the hope of avoiding being typecast in "teen films." This past summer, Ali moved to New York City to perform in the hit stage presentation of "The Vagina Monologues," which she says was the most extraordinary experience of her life, predominantly because it forced her to leave Hollywood.

"For me, just standing up for myself is the biggest thing," Ali says. "In this business, being a blonde actress who has been in a lot of teen films, it's just about finding confidence within myself and knowing that I'm in control of my life."

Ali notes that she has two independent films lined up and is waiting on word for a third, and says that things are starting to happen. "Let them be good, or let them be really bad," Ali declares. "I'm trying something different, and if I fail, then [I want to] fail terrifically. I'm putting myself out there."

Being from New Jersey, Ali believes her strongest quality is that she is a "pain in theass." Even though at times she may not feel confident, she tries hard to project herself in a certain way.

"I really try hard not to be a vain person, and working in this

business, so much of it [becomes] about the way you look and present yourself," Ali says. "I love what I do, and the thought of someone getting something over on me or making me do something that I don't believe in is just appalling."

She's just trying to dance in her choice of hallways.