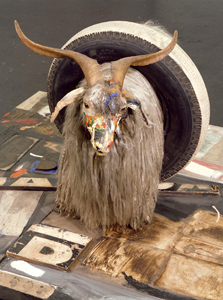 MOCA: After Dark, the Museum of Contemporary Art’s late-night Saturday series with live music, DJ sets and enough alcohol to have police cars waiting on Grand, reached its hitherto zenith with Robert Rauschenberg: Combines in the summer of 2006. I returned to the gallery an unusually-for-me five times during the exhibitions run because Rauschenberg – who died May 12 – was a master of overdetermination, each compilation infused with a potpourri of elements where even the novice viewer could state, “I see something new every time I look at his work” and actually mean it.

“Combines” refers to Rauschenberg’s signature style, which his best-known work, aptly titled Monogram, represents beautifully. Here, a stuffed goat is thread through a tire, his face splatter-painted, his floor a collage of old newspaper.

Frenetic playfulness is evident in all of Rauschenberg’s work – in another piece, the artist, canvas pointed towards him, painted on a stage to a filled crowd until an alarm clock went off signaling it was time to stop, at which point the artist hammered the clock into the canvas. He then walked.

These combines, and Rauschenberg’s personal life (married, divorced, affairs with men and women) echoed the ethos of Los Angeles, and while the artist did much of his work in New York, it has that Californian vibe where anything seems possible, and may have been why these works resonated with so many Angelenos, themselves, like the city they inhabit, a merging of disparate elements. Currently, there are a number of smaller exhibitions of his work around the city; with his passing, expect even more.

Rauschenberg once said, “I feel as though the world is a friendly boy walking along in the sun.” The artist was that boy and his work will continue to cast rays of delight along anyone who sees them, enough to brighten exhibits After Dark or bake you with a joyful tan during the day.