Dave Foley: Leader of the Cult in Uwe Boll's Postal 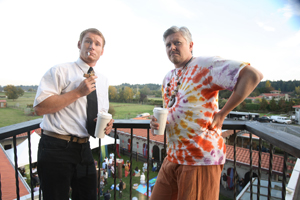 It’s a Friday afternoon in Santa Monica. One of my favorite L.A. publicists patches me through to comedian Dave Foley.

Ten minutes later, we’ve discussed his film and television career, I’ve (inadvertently) managed to insult the size of his penis and we’re saying our goodbyes. Confused? Allow me to explain.

The interview in question is in support of the new comedy Postal. Foley co-stars in director Uwe Boll’s tale of a slacker who helps overthrow a terror plot to end the world. In it, he plays Uncle Dave – a lusty, charismatic cult leader – who, alongside his nephew (Zack Ward) and a cadre of sexy blonde bimbos fights Osama bin Laden and a little bit of everyone else in the process.

Boll is a controversial figure in filmmaking, but not for the reasons one might expect. Publications like Entertainment Weekly have done features on this German auteur begging the question, “Is he the worst filmmaker in history?” The Internet is abuzz with people who simply don’t get why the guy continues to direct.

A Uwe Boll film seemed an unlikely place to find such a celebrated comic voice. But Foley had no pretense whatsoever about working with him.

“You know what? I wasn’t familiar with his work at all. But I started – I went online and read a little bit about him and the fact that he was so hated really appealed to me,” he says with a laugh. Boll shares a sense of admiration for Foley: “Dave brought ideas to the table that captured the kind of ruthless comedy we were looking for, going way over the top. This is not your typical PG-13 humor. It is really bold.”

He may be referring to a number of things. Foley’s Uncle Dave is a lusty religious figure who pisses his days away between the thighs of his most buxom followers.

To portray him, Foley put the pedal to the metal, appearing nude for one of the scenes. This is no ordinary butt shot, either. He gives audiences the full monty. However, the controversial money shot didn’t seem to faze him one bit.

“Ewan McGregor’s fully nude in everything he does – including Star Wars,” jokes the comedian.

To Foley, it’s a bit more unusual to him that people are hung up on his nude scene and not surprised by the fact that he has a slight gut. When explained that audiences may be less inclined to look at the rest of his body due to the overwhelming presence of his “little buddy,” the comedian can’t help but joke right back.

Foley rose to fame in the late 1980s to early ’90s as part of the irreverent sketch comedy troupe, Kids in the Hall. He, along with his fellow Canadian laugh-makers (Bruce McCullough, Kevin McDonald and Scott Thompson) tackled everything from cross-dressing to interracial romance to homosexuality. The group’s no-holds-barred writing was offset by the whip-smart producing of Lorne Michaels (yes, THAT Lorne Michaels).

After that show came to an end, Foley took film roles and also starred in the hit NBC sitcom “NewsRadio.” He still remains close to his former co-workers, however. He and his Kids in the Hall mates are back on the road, touring the United States, and he still keeps close ties with his “NewsRadio” cast mates.

Still, Foley focuses on the next big thing. When asked what he’d like to do in his future, he admits to a desire to work with directors like Spike Jonze and Michel Gondry. And forever the classy star, he ends the conversation (inappropriate physical references and all) with the same humor and biting sarcasm that his career has been built upon.

Postal releases in select theaters May 23.