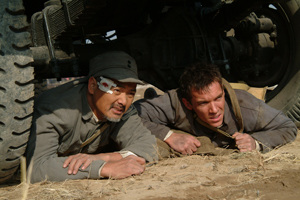 George Hogg (Jonathan Rhys Meyers) was a journalist who found himself a stranger in a strange land. Fate dealt him a set of circumstances that left him in charge of an orphanage filled with unruly boys during Japan’s occupation of China in the 1930s.

The road there was a tough one: after being caught and nearly assassinated by Japanese soldiers for taking photographs of the genocide he encountered, Hogg is rescued by a benevolent Chinese nationalist named Jack Chen (Chow Yun Fat). The men strike up a friendship that leads to Hogg’s acquaintance with an American medic named Lee (played by Radha Mitchell). She’s a tough cookie that sees to it that Hogg devotes the care, time and attention to the unruly orphans.

With hard work and perseverance, Hogg fixes up the orphanage and manages to provide the boys with healthcare, food and stability. When the war literally comes knocking at the door, he makes the snap decision to travel hundreds of miles with the boys to safety in the village of Shandan.

The Children of Huang Shi is an engaging and captivating movie about moments of kindness at the hands of strangers. Rhys Meyers’ performance of Hogg is a bit cocky at times, but for the most part is sympathetic and charming. Although the romance between the two main characters is also forced and out of place, the rest of the movie is solid.

The Children of Huang Shi releases in select theaters May 23.