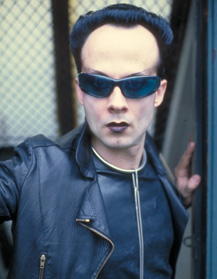 In a year which saw the boundaries of the documentary stretched from Super Size Me to Fahrenheit 9/11, writer-director Andrew Horn again tests the possibilities of the medium with his biopic/music video on the 1980s New Wave singer Klaus Nomi. In The Nomi Song, Horn attempts to introduce the general audience to New York’s New Wave scene, explain his bizarre protagonist, and generate empathy for the singer’s untimely demise as one of the first victims of the AIDS epidemic.

The Nomi Song employs a wide spectrum of visual styles and assorted artistic mediums to present its avant-garde subject matter. Old footage of Klaus performing in New York clubs proves the most effective foundation for the film, while the on-camera interviews are interesting but not substantive.

In one particularly bizarre circumstance, the audio-only commentary of Klaus’s German-speaking aunt is combined with visuals of a diorama of her apparent house, complete with a small doll of "Auntie Nomi." In such instances, the film seems desperate for any footage of the mysterious star, stretching its interviews to anyone who remotely knew him and cannibalizing old science fiction B-movies to emphasize Nomi’s alien-like persona.

Despite its attempts at the avant-garde, however, The Nomi Song remains at its heart no more than a VH1 "Behind the Music" episode. Nomi’s story unfolds chronologically, from his earliest discovery at a vaudeville show to his appearance with David Bowie on "Saturday Night Live" to his death from AIDS.

The film does a fine job creating audience empathy for a lonesome singer who was rarely understood. Unfortunately, it does little to explain the man or explore his life in great depth. No one who appears in The Nomi Song seems to have any idea who Klaus Nomi really was, nor do they seem comfortable discussing his life.

The Nomi Song recognizes that Klaus Nomi deserves recognition and exploration as a mysterious man and a revolutionary artist, yet it also demonstrates the near impossibility of doing so. Perhaps some things should, and indeed must, remain unexplained and treasured for their strangeness.

The Nomi Song opens Feb. 4 at the Nuart Theatre in Los Angeles.