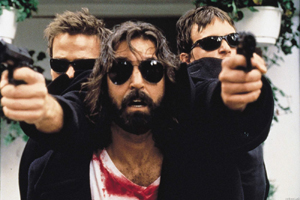 The 1950s just got a kick in the face from 2008 in the form of Angel City Drive In, an infant endeavor where driving your car to the party doesn’t mean you ever have to get out of it. Built off the basic drive-in theater principles that dominated our parent’s teenage years, production company Devil’s Night holds a monthly movie screening on the top floor of a parking structure in the middle of downtown Los Angeles.

Starting last September with Pee-Wee’s Big Adventure, the drive in proved to offer more than just a nostalgia trip. From a DJ spinning through the opening credits to the post-movie Pee Wee-costumed bike ride through downtown, the inaugural event turned the hard-to-find rooftop screening into an all-night party.

Like the passing out of free beer coozies during The Wild One to The Princess Bride’s “Family Night,” every screening has a kitsch. So, as if showing The Boondock Saints on a giant screen in a parking lot dwarfed by the surrounding high-rises weren’t enough, this Saturday is “Sticker Night” where adhesive vinyl bearing the 90013 zip code will be thrown around as carelessly as the bullets on the screen.

In addition to being a great revival series, Angel City Drive In has added their modern urban twist to all the details of the outdoor movie-watching experience including local roller derby girls that come to your window with popcorn and an FM transmission that lets the movie dialogue blast your car’s own sound system.

And if you are drive-ally challenged, never fret. There is even an Astroturf plot for the walk-ins to graze on!

So make that crucial RSVP, roll deep and B.Y.O.B. because two Catholic brothers are on a murderous moral crusade and you’ll get the free stickers to prove you were nearly engulfed by downtown Los Angeles as you watched it (sort of) under the stars.