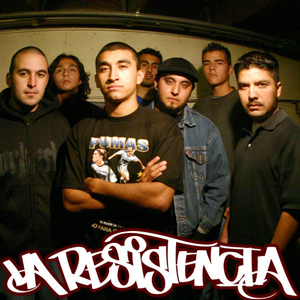 Translated into English, their name means the Resistance. This a hardcore ska band that’s been getting big turnouts.

Of course, ska is not considered a new thing, but in the L.A. Latin ska scene, La Resistencia is one of the bands heading the movement. The members of this nine-piece band come from the South Gate-South Central area. In these areas not everything is accepted, and that lack of acceptance inspired them to title their 2005 EP, Libertad de Expresión.

Notoriety may not have been the idea that gathered these guys together, but lately, that’s what they’ve been receiving. They’ve been featured on Latin entertainment shows like LATV, “The Roof” and mun2.

Since their days of playing at the Allen Theatre in South Gate, the band has fought to keep playing, and helps others do the same. The drummer of the band, Clemente, explains that he helps new bands get their music recorded in the studio. The funding for all this comes from what the band earns promoting shows, and helping all these bands takes a lot of cash.

La Resistencia’s music is best seen/heard live, and then the contagiousness of the experience will make you want to hear it on wax. In the underground, it’s not the easiest thing in the world to actually sell your music, yet La Resistencia have been known to sell 500 copies of their CD in one night at a show.

The city of Los Angeles has the strongest Latin ska scene in the United States. It continues to evolve with yet another generation of bands like La Resistencia.

These kids mash it out at the shows with their loyal listeners, and as promoters they’ve proved to be professional organizers. Last year was an amazing year for La Resistencia, as well as for the ska movement.

The respect is growing for this band in Los Angeles, San Bernardino and even Mexico. La Resistencia is ready to take charge in ’08, and we’ll all be watching the movement closely.