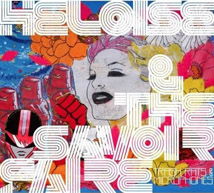 If you took Missing Persons and made them a little less spacey and a little more bubblegum, you’d have a reasonable approximation of Heloise & the Savoir Faire. The band doesn’t have a drummer like Terry Bozzio going off into polyrhythm-land every chance he gets, but Heloise often brings Missing Persons singer Dale Bozzio to mind as she glides vocally from gutsy rocker grrrl to squeaky-scared cheerleader.

Heloise mocks egotistical girls and the snobby club scene on “Members Only,” and keeps her tongue-in-cheek as she plays up horniness to the hilt on “On Fuego.” “Canadian Changs” hits the dance floor; the song is one of two where Heloise shares vocals with former Blondie cougar Deborah Harry.