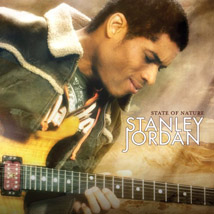 Ten years is a long time to take a break. Jazz guitarist Stanley Gordon, famous for his touch or tap technique where he plays the fret-board like a keyboard, has returned from self-imposed musical exile with State of Nature, a 76-minute excursion through styles that have inspired, influenced or engaged Jordan.

Like his best-selling ’80s releases, State of Nature is a mix of originals and covers. Overall, Jordan’s new effort won’t silence detractors who criticized him for technique over aimless mainstream triteness.

Jordan overdubs his own piano on top of his soulful, Wes Montgomery-informed guitar during Miles Davis’ classic “All Blues.” He follows a related path on Horace Silver’s standard “Song For My Father.” And his technical expertise shines during a solo Mozart classical performance.

State of Nature is currently available.