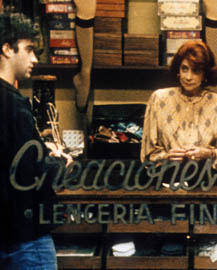 Entering the world of Daniel Burman’s Lost Embrace, a serio-comic glimpse into the vibrant Jewish population of Buenos Aires, one is first struck by the fact that there is a vibrant Jewish population in Buenos Aires. Within the confines of an underground shopping mall, a unique and engaging reality unfolds. Burman’s humorous microcosm remains perpetually genuine and thoughtful, though his presentation of the story lacks precision and focus.

Ariel (Daniel Hendler) and his mother Sonia (Adriana Aizenberg) run the "Creations by Elias" lingerie boutique in the mall, though father Elias has long since abandoned the family to fight for Israel in the Yom Kippur War. Feeling trapped in the monotony of the mall and still unable to cope with his father’s departure, Ariel hopes to attain a Polish passport and begin life anew in Europe.

While waiting, Ariel busies himself with romantic trysts with Rita, the sexy Internet café proprietor, and the constant tribulations of his brother Joseph’s ill-fated entrepreneurial schemes. Suddenly, Elias returns to Buenos Aires, and Ariel must confront his past and reassess his future.

The quirky mall community forms the heart of Lost Embrace. Each tenant develops a fine quality of depth and humanity rarely seen in modern breakneck-pace cinema. Burman knowingly envelops the audience slowly, allowing them to seep into the very thoughts, hopes and fears of his people. Each and every actor gives a first-rate performance, from Hendler and Aizenberg to Ariel’s singing grandmother (Rosita Londner).

The screenplay by Burman and Marcelo Birmajer, relying heavily upon Ariel’s casual voiceovers to bridge the vignettes of the community, establishes many rich characterizations and imbues the environment with authenticity but dawdles incessantly. Burman seems torn as to the true purpose of his story, sliding between amused character study and father-son redemption narrative.

Ultimately, Lost Embrace seems truly alive, full of truth and warmth and crafted with passion, faulty only in its rough execution.