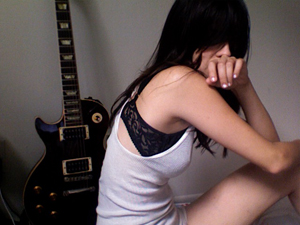 With their catchy guitar riffs and thumping bass lines, IO Echo is set to storm the legions and break through the mainstream. Although some radio audiences are somewhat acquainted with them, IO Echo’s broad appeal, with its infectious tunes and melancholic numbers, makes them a band that should be enjoyed immediately and revered in years to come.

IO Echo vocalist, IO (a.k.a. Joanna Gikas), is the driving force behind the band. She composed a majority of the songs that comprise its eponymous debut.

Originally from Washington, D.C., IO came to Los Angeles to form IO Echo. The band’s name is derived from the Greek translation of her name, Ioanna. She simply chose Echo because it rhymed with IO.

With comparisons to famed ’80s vocalist Siouxsie (from Siouxsie and the Banshees), IO can’t help but feel flattered. Although the comparisons are welcome, she’s hesitant to whole-heartedly accept them because she wants to forge a unique identity with her music.

“I’m drawn to music with minor notes in them that I can play on piano,” explains IO.

A wide variety of bands influence IO’s distinct sound, but the common thread between most of them are minor notes. From Radiohead to Portishead, Bauhaus to the Smiths, many of the bands that inform IO Echo’s sound each have a melancholic side to them.

In addition to singing, IO also plays rhythm guitar and keyboards. The rest of IO Echo is comprised of Leopold Ross on lead guitar, Paul Rinis on drums and Salvatore Romano on tambourine and keyboards.

IO Echo’s broody side is showcased well on songs like, “Stalemate,” “Beware” and “I’m on Fire.”

But just as easy as IO can bring you down, she can also bring you right back up. “Enter to Exit” and “Addicted,” which has been named Song of the Day on Indie 103.1, have led IO Echo to make appearances on the famed South By Southwest Festival (SXSW) in Austin, Texas, while also headlining local gigs.

IO admits that the band’s sing-a-long lyrics and beats make a much greater impact live.

“When you hear it live, it becomes much more of a monster,” states IO.

IO feels that the music translates better live than it does on album because all the raw emotion poured into the lyrics can been seen and felt onstage. Although you wouldn’t really guess it by the flamboyant nature of the more upbeat songs in the band’s eponymous debut, many of the themes explored and lyrics’ inspiration come from IO’s fascination with murder mysteries.

“I watch unhealthy amounts of ‘The First 48,’” admits IO of the A&E reality series based on homicides.

IO considers the show’s protagonist an influential character in her writing. As a young child, she read many murder-mystery books and her fascination with untimely deaths have lead her to incorporate those fears into some of her lyrics.

Lately, IO Echo has seen some well-known bands come to their aid. The Von Bondies and She Wants Revenge have collaborated with IO Echo both live and in studio.

Ultimately, IO wants to create music that she and her audience can enjoy. Once that goal is met, everything else falls into place.

“I create music I would want to listen to,” states IO.

Sometimes perfection is just that easy.

IO Echo will perform May 23 at Safari Sam’s and June 2 at the Viper Room. For more information, visit www.io-echo.com.< /i>