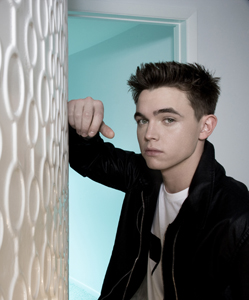 Just barely old enough to drink legally, this L.A. dweller is not “Leavin’” anytime soon. To make his point further, he titled his new single off his third Hollywood Records release, Desperate, exactly that. “Leavin’” was produced by the-Dream and Tricky Stewart, the team responsible for Rihanna’s “Umbrella.”

From going Gold with the group Dream Street and earning an Emmy for “All My Children” to solo singer stardom, he’s currently chilling on the charts again. Here, he cues us on where he likes to hang in his hometown.

Favorite Aspect of Performing: Seeing the fans that have been there from the beginning.