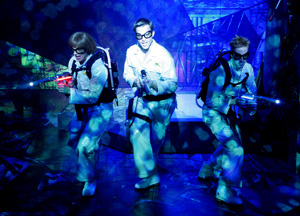 “Pest Control” is a wall of sight and sound musical. It will either inspire the viewer or drive him out of his seat.

Bob Dillon (Darren Ritchie) is a bug exterminator who’s mistaken for a professional assassin by both the mob and the CIA. What ensues is a wild chase of a plot set to a musical score whose songs are all raps and belters, making for a same sounding soundtrack; but the voices rapping and belting are all on the mark. Still, the sound gets old.

Bob is hired to kill the most dangerous man in the world, and if he fails in his mission he may lose his girl and his life. The ensemble cast coheres well and perhaps is even too overwhelming for the Art Center’s smallish stage.