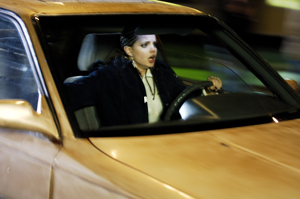 Ever have one of those really terrible days? Days so bad you want to jerk the wheel of your car into an incoming bridge embankment? Tom is having one of those days. He just got evicted, has no job and is now essentially homeless. Poor Tom.

Well, his day just got worse. Stuck, based on a hard to believe but very true story, tells the tale of Tom (Stephen Rea), who is struck by a nursing home worker, Brandi (Mena Suvari), and becomes literally stuck in the windshield of her car. On the verge of a lovely promotion, yet very much strung out on drugs and booze, Brandi decides that instead of helping Tom, she will park the car in her garage and leave him to die.

Master of Horror Stuart Gordon directs this utterly bizarre and darkly comedic film. Gordon, best known for his ’80s classics like Re-Animator and From Beyond, strays from his usually fantasy based horror to delve into a far more disturbing and realistic brand of terror.

Gordon notes that when he first read about this true story in a newspaper, he was utterly blown away by it and knew he had to make a movie about it. The finished screenplay, penned by colleague John Strysik, impressed Suvari so much that she knew immediately she had to be involved, not even realizing at first that it was a true story. Donning a set of hilariously scary dread locks, Suvari plays the antagonist Brandi with a refreshing sense of realism.

While the true story may be devoid of any sort of humor, Gordon’s Stuck has its tongue planted firmly in cheek throughout its story. The black comedy in the film is at first very unsettling as we witness the debacle of a man trying to get out of a car windshield.

The mood captured by Gordon is one of strange campiness. Most “campy” films tend to gain their unintentional humor after years, but Stuck breaks the mold of camp and provides a truly strange combination of humor and horror, all without taking itself too seriously.

Gordon’s affinity for the horrific is played out through some truly cringe-worthy gore gags that remind you that this is indeed the work of a horror legend. It won’t give Hostel a run for its money but, unlike the former, Stuck remains plausible and realistic throughout.

Suvari’s performance is multilayered and utterly compelling as we watch this good girl gone bad trying to figure out what she needs to do to rectify the situation. Should she help the man and risk jail time and her promotion? Brandi screams at Tom multiple times, shouting, “Why did you do this to me?” and doing anything in her human emotional repertoire to justify her horrible and truly horrific actions inflicted upon the man.

Stuck is, in one word, bizarre – a film that is destined for absolute and inevitable cult film status. While the production value is a bit rough around the edges, Gordon makes up for this with a truly original horror story that lies in sharp contrast to the blast of remakes and sequels that the industry has been churning out like butter.

Stuck releases in select theaters May 30.