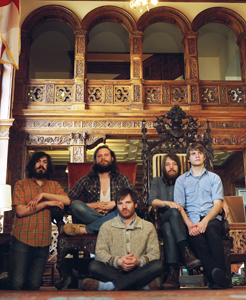 If you’ve ever claimed that rock is dead, you’re half-right. You know what’s not rock ’n’ roll? Jeff Hanson and Fleet Foxes. Each folk act has an album out this summer on a Pacific Northwest label – the rather effeminate Hanson on Kill Rock Stars and much blogged about Fleet Foxes on Sub Pop. Both are excellent, and though both were set to have their releases out June 3, Hanson’s record was pushed back to Aug. 19.

June 10 finds us with a much needed EP by Scottish post-rockers the Twilight Sad, whose initial FatCat releases were lush, loud and filled with rushes of Andy MacFarlane’s Jaguar chords. Here, It Never Snowed. Afterwards It Did. will contain four reworked songs and two new ones – the title track and a cover of Daniel Johnston’s “Some Things Last a Long Time.” June 10 also offers a new Odd Nosdam record (Pretty Swell Explode, on Anticon) and a debut by Flying Lotus (Los Angeles, on Warp).

Q: Why will Flying Lotus win the hip-hop battle of June 10?

A: He’s from the badass town of Winnetka. Also, he’s the nephew of Alice Coltrane.

Last year a fair bit of press went to Brooklyn’s Antibalas, but this year sees a third release from NOMO, Ann Arbor natives and one of the finest attempts at imposter-Afrobeat. Ghost Rock (Ubiquity) will boast enough musicians to run a softball team, and comes out June 17.

While talking up all things retro and/or Afrobeat, there’s also Seun Kuti (from the loins of Fela) and his Egypt 80, whose self-titled record on Disorient (June 24) is prompting a trek to the El Rey on June 21.

Season of big bands and high brass content? Vice Records managed to snatch up doo-wop garage party King Khan and the Shrines, whose The Supreme Genius of King Khan releases June 17. The well-hyped record is merely a collection of previously released tracks, though it does pave the way for a summer tour, including a stop at the Echo on July 10. Meanwhile, Khan’s other, one-man band Mark Sultan as BBQ, has a clear vinyl version of Tie Your Noose for sale on Bomp! Records come June 24.

June 24, Vanessa Hudgens will be Identified as a singer. I’ll stop there.

A better bet, then, is English wad of joy the Wombats, finally seeing a U.S. release for last year’s A Guide to Love, Loss and Desperation – via metal label Roadrunner Records, no less. May there be crossover with Roadrunner’s usual followers so as to quietly boost the sale of stuffed wombats on the band’s Web site.

Also available June 24 is Small Vessel (Anticon) by fellow Englishman SJ Esau, who will hopefully convey some of the kitty love he revealed on 2007’s Wrong Faced Cat Feed Collapse. Sadly, the cat still has no balls.

At some point, God created July. Long-time post-punkers Wire recently announced their 11th record, called Object 47 and due July 7. No U.S. tour dates announced, save for one in New York, but if you’re vacationing in Croatia or Portugal, you’re in luck!

Local noise-rockers Abe Vigoda also have a release set for this week, Skeleton (PPM). They will be found more easily in Los Angeles than Croatia.

July will also give the spotlight to Patti Smith and her late husband at once. First, on July 8, Smith’s 2005 and 2006 collaborative concerts with My Bloody Valentine’s Kevin Shields are immortalized through The Coral Sea.

Named for her book of the same title, the recorded double-disc concert set is a tribute to late photographer Robert Mapplethorpe, and consists of – what else? – her spoken word over his noise effects.

Two weeks later, Fred “Sonic” Smith gets the re-release treatment with Masonic Temple, Detroit 1978, a live recording by Sonic’s Rendezvous Band, his post-MC5 effort which also featured Scott Asheton of the Stooges. A rock album, surely, to trample all over the efforts of Ratatat’s dueling (and, by contrast, tinny) guitars, of which we’ll taste more on LP3, XL’s third release by the silent electro-rock teases, also due July 22.

That said, rock ’n’ roll does enjoy a summer vacation, and Smith ’n’ Smith aside, July’s got new records by Daedelus and fresh Warp signing Leila (recently on tour with Bjork). Daedelus’ Love to Make Music To – his self-proclaimed “drug/love record,” presumably a new smattering of crackles and pops – releases July 15 on Ninja Tune, while Leila’s Blood, Looms and Blooms releases July 8 and kicks off with the single “Deflect,” featuring Martina Topley-Bird.

And then there’s the mystery factor. Has the Real Tuesday Weld discovered the present day? When will there be a U.S. release for new Madlib/Ivan Conti collaboration Jackson Conti, whose record, Sujinho, is ridiculously hard to come by?

The Walkmen will finally have a new record out on Gigantic, Aug. 19. No title’s yet been announced.

And will the (International) Noise Conspiracy go back to their garage roots on The Cross of My Calling? Rick Rubin produced it, so, no. No release date set as of press time.

These, my friends, are the nations of the world, brought to you by Yakko.