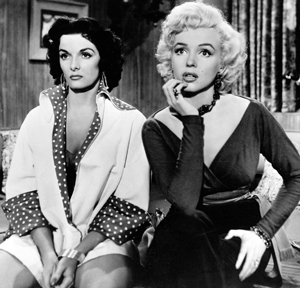 While the term “Broadway” is normally associated with the Big Apple, Los Angeles has its own skyscraper-hidden and historic theater-laden street. And although most of our Broadway Boulevard has been converted into endless blocks of tiendas and iglesias, the Los Angeles Conservancy is watching over the few remaining stages left in downtown.

Enter the 22nd Annual “Last Remaining Seats” movie program, which plays old movies in yet older theaters every week until summer officially starts. By playing classic movies like Goldfinger at ornate theaters like the Orpheum, LAC hopes to preserve the city’s historical architecture by raising public awareness of their existence.

The series is part of an initiative to revitalize the area and turn it back into a “24-hour urban place,” and with the help of America’s eternal sweetheart, tonight’s screening of Gentlemen Prefer Blondes at Los Angeles Theatre will bring that dream one step closer. Despite her tortured life off-camera, Marilyn Monroe presented an unattainable model of class on screen. From Some Like It Hot to The Seven Year Itch, good ol’ Norma Jean made women feel insecure before Angelina Jolie’s lips were even thought about.

In Gentlemen Prefer Blondes, Monroe plays a cruise ship showgirl with an affinity for grandeur who uses charm and allure to woo rich men and destroy the evidence. The movie is said to be Monroe’s best, and her iconic musical number for “Diamonds are a Girl’s Best Friend” has since inspired everyone from Anna Nicole Smith to the Material Girl herself.

Tickets are a bit pricey, but the LAC’s non-profit status turns your date with the queen of the blondes into a proper tax write-off. Philanthropy never gave back so much!