The Foot Fist Way: The Low Budget Comedy That Could 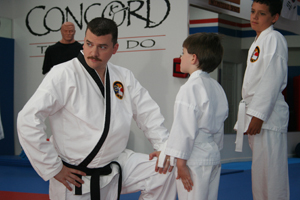 The Foot Fist Way is going to be big, Napoleon Dynamite big. This little comedic engine that could is set to destroy what you thought a low budget movie could entail, mainly, unadulterated and non-stop hilarity.

Low budget in this case is not your typical indie gem whose budget is into the mid-20 millions. No, in the case of The Foot Fist Way, director Jody Hill explains that this is a real low budget film, made for less than a typical studio film spends on pretzels and Vitamin Water. Hill saved up some money, not much, and did what any good investor does, applied for as many credit cards as possible. Luckily, the investment has paid off. The film, though made in 2005 and featured in Sundance 2006, is finally getting a roll out theatrical distribution with a little help from a man you may have heard of, Will Ferrell.

Ferrell and Anchorman director Adam McKay have started their own production company, Gary Sanchez Productions and chose The Foot Fist Way as their first release. Ferrell relays that although their prediction for the film’s box office numbers is modest, maybe 60 million opening weekend (joke!), they’ve put their love and trust in the film in hopes of it being a real hit.

Upon his first viewing of the film, Ferrell admits he immediately urinated his trousers. Initial consensus was it might be a health condition, but upon further viewings, he realized the flick was something special.

The Foot Fist Way is the love child of a three way between Hill and leading actors Danny McBride and Ben Best. The trio went to film school at the North Carolina School of the Arts, which they admirably note has since closed its doors.

McBride, who gained screen time along with Andy Samberg in the vastly underrated Hot Rod, owes much of his onscreen presence to the phenomenally ludicrous screenplay written by all three men. His presence runs the entire show.

McBride is a master of comedic timing and, though tickled at with his roles in Hot Rod and Drillbit Taylor, proves first-hand that this is a man with a future in the industry. McBride plays Fred Simmons, a narcissistic Tae Kwon Do instructor whose life comes crashing down after his wife, played with tact by newcomer Mary Jane Bostic, gives another co-worker a hand job. To take his mind off his collapsing marriage, Simmons, his prepubescent second in charge, Julio, and best friend, played by Jody Hill himself, head to witness a performance by Simmons’ martial arts idol, Chuck “The Truck” Wallace.

The beauty of The Foot Fist Way is that it foregoes complicated and overly ridiculous plot elements for unforgettable characters and some of the funniest dialogue ever witnessed.

Hill, McBride and Best offer that during their school days they spent most of the time sitting around drinking beers and watching the same comedies over and over. Why couldn’t they make one of these movies?

The Foot Fist Way is set to explode in a way that few films can compare. It’s the type of film that you immediately want to see again mere moments after your first viewing.

While comparisons to Napoleon Dynamite will prove inevitable considering its almost complete word-of-mouth marketing and ultra-low budget, The Foot Fist Way blows Napoleon out of the water with ease. It’s a hilariously obscene, yet strangely heartfelt, R-rated blast of comedic brilliance that your friends will be quoting and obsessing about for weeks, months and inevitably years to come.

The Foot Fist Way releases in select theaters May 30.