The Edge of Heaven: (Strand Releasing) 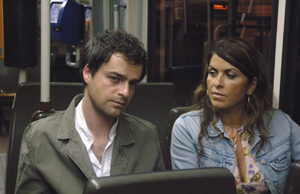 What a wild ride this film is! With Germany and Turkey as the backdrop, The Edge of Heaven plays out the death of one women’s mother and another mother’s child. Both families are connected via one man: Nejat Aksu, a German professor with Turkish roots.

The lowdown: Nejat’s father, Ali, invites a Turkish prostitute, Yeter Ozturk, into his home to be his paid companion, and Nejat forms a soft spot for her when he finds out she sends money back to her daughter, Ayten, in Turkey for her studies. When Ali strikes Yeter down and kills her, Nejat leaves for Turkey to find Ayten, who turns out to be a political activist who has fled from Turkey to Germany to avoid persecution. There, she meets and falls in love with Lotte Staub, despite Lotte’s mother’s disapproval.

The saga of both families unfolds, intertwining tragedy, love and loss and building up to an emotional boiling point that’s somewhat overwhelming, and extremely moving.

The Edge of Heaven releases in select theaters May 30.