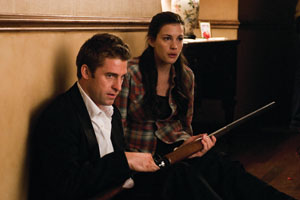 The Strangers tells the story of Kristen McKay and James Hoyt (Liv Tyler and Scott Speedman), who arrive at a remote vacation home for what Hoyt hoped would be a romantic night in, after proposing to the girl of his dreams. Unfortunately, she turns him down, and the evening is ruined.

It doesn’t help that the only entertainment in the house is an old record player with nothing but creepy, perfect-for-scary-movie albums. Still, this heartache is just the beginning of pain for this unhappy couple, when they receive a knock on the door late at night accompanied by a menacing voice, which asks, “Is Tamara here?”

In terms of setting a mood, The Strangers works very well. With the current trend toward torture-porn being passed off as horror, it’s refreshing to watch a film that builds tension through technique and suspense rather than excessive gore.

This is the Hitchcockian style where what you do not see scares you as much or maybe even more than what you do. And what you do see here is unsettling. Although the set-up of this movie works very well, in the end the film descends into a melee of mindless butchery.

The lesson here: don’t answer the door in the middle of the night when strangers come calling.

The Strangers releases in select theaters May 30.