Rebecca Pidgeon: Behind the Velvet Curtain: Songs from the Motion Picture Redbelt 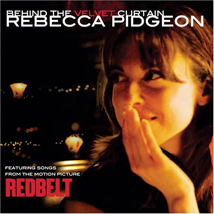 Pidgeon is the wife of acclaimed filmmaker David Mamet and about half of the material on Behind the Velvet Curtain is associated with his recent release Redbelt. The film is ostensibly about a Jiu-Jitsu fighter and his internal conflicts, but the music here is far from rock-’em sock-’em.

Pidgeon has put out several albums in the past including a Celtic-flavored release. This one primarily has a Brazilian flavor, either subtly like in the title cut or overtly like the dreamy “Manha” that’s sung in the Brazilian national language, Portuguese. Pidgeon doesn’t have the exotic accent, but fans of Bebel Gilberto’s work will find a similar appeal in these downbeat mood-setters.

Behind the Velvet Curtain is currently available.