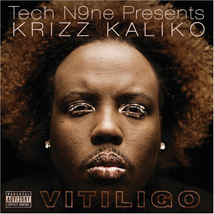 Just when hip-hop music was breaking away from its current homogenized state with exciting music via Chicago a la the Cool Kids and Kid Sister, indie rap takes a complete headfirst nosedive through a downward spiral with Krizz Kaliko’s debut. Not even the Tech N9ne Presents moniker could save the aptly titled Vitiligo, a skin disorder that Kaliko suffers from and prominently displays on the album’s cover and inside artwork.

Despite guest cameos by rap superstar E-40 and mentor Tech N9ne, Vitiligo offers nothing more than a boring trek across low budget production and amateur lyrics: see “Jungle Love” and “Do Sum’n” for prime examples.